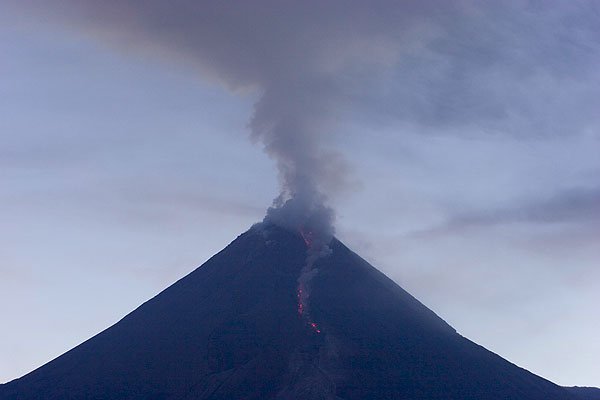 Gunung Merapi volcano is the most active volcano in Indonesia. A small eruption occurs on average every three years and a major one every ten to fifteen years. The last major eruption was in October 2010, spewing volcanic material up to a mile high.

The Merapi is 2,968 meters high and is close to the city of Yogyakarta.

The first time I visited Indonesia was in 1993. Together with my parents, my wife Marieke and our children Linneke, Freek and Lotte we traveled 5 weeks over Java and 1 week Bali. The highlight (literally and figuratively) was the ascent of the Merapi volcano (2,968 meters). Below is the report of the ascent at the time.

Nothing is on the program today, so laze around the pool and hang between our rooms. Since the banks are closed, I walk with Lin to a money changer near our hotel.

While 625,000 rupiah is counted on $ 300 worth of American Express checks, a girl enters the office, apologizes for not showing up last night, and makes an appointment for 10 p.m. tonight. I have no idea what it is about and, when the girl has disappeared again, I start to fool around with the 'counter' about his 'date' for tonight.
He explains with a laugh that the girl is going on a sunrise tour to the Merapi.
My ears are ringing and I know I'm sold: Climbing the Merapi!

Will Marieke appreciate that? Can I handle that? After some practical questions about the climb I am sure, I think, on the Merapi!

Marieke has no objection and even encourages it. Mom and Dad are thrilled. Freekje is angry that he is not allowed to come. Pa still has doubts about whether to go along, but the climb seems to be too difficult for him. I book the trip and the rest of the day my thoughts are dominated by that one. Climbing the Merapi!

After a time-consuming, but pleasant stroll through the Malioboro with dad, Marieke and Linneke, I eat and drink cautiously and spend at least an hour packing and unpacking my backpack.

Would it rain? Pack Pajung. Or is that too heavy? One or two half liters of water? Small towel. Biscuits. Chocolate. Enough photo rolls. Camera, telephoto lens, flash light. Dry socks and T-shirt. Patagonia. Well, no, well, don't bring a jacket. Anyway. No, but not too bulky. Apple, one bottle of water, aspirin. Ma still has grape sugar. Powder for two cups of Nescafe in an empty film cap.

Together with Lotte and Freek in bed after dinner to already sleep in the front. When Marieke wakes me up at a quarter to ten, I am so incredibly lazy that I don't really feel like it.

Have to poo. Nothing can come true.

Have a drink, put on a backpack and then bring the jacket with you. Steps with mom, dad and Marieke at five to ten to the money changer, where after ten minutes I get into a van. Nothing or nobody stops me, I'm going on the Merapi!

After four pick-ups in Yogya, the group of ten is complete: four women and six men. Except for three couples, there is no talking along the way. I hear the couples speak English, German and French. So no countrymen. I wonder if I should go upstairs as a loner in the group, or if some speech water will be released later on.

The sjopeur drives out of town and most try to take a nap on the fabric-covered wooden planks. Me too, close my eyes, but there is no question of sleeping. After an hour we turn off the main road and the Merapi shows itself clearly. It is partly cloudy and the moon, full two days ago, provides mysterious and fairytale lighting. We wind from the north in another hour to the starting point. the driver regularly shifts back to first gear and under a hellish noise the diesel engine pulls up step by step. At half past twelve we enter the yard of the measuring station, a decaying pondok where on the 'part' some tables and wooden benches have been placed for the mountain tourists. When a child's voice starts to cry behind an interior door, I realize that the residence must also be an ordinary house.

We are treated to soggy sandwiches with sprinkles and a cup of tea. During the nightly lunch, an English-speaking boy breaks the silence and, muffled by the waiting adventure, there is some talk about the experiences in Indonesia. The English boy, a German girl and I are the only ones talking. Neither of us appears to have climbed a mountain or volcano before. I tell the girl that she gave me the reason to join this tour. It was her appointment at ten o'clock in the money-changer's office.

Clock one tells a guide in flawed Indo-English that we are leaving, that a total of three guides are going along, of which he is the only one who speaks English. 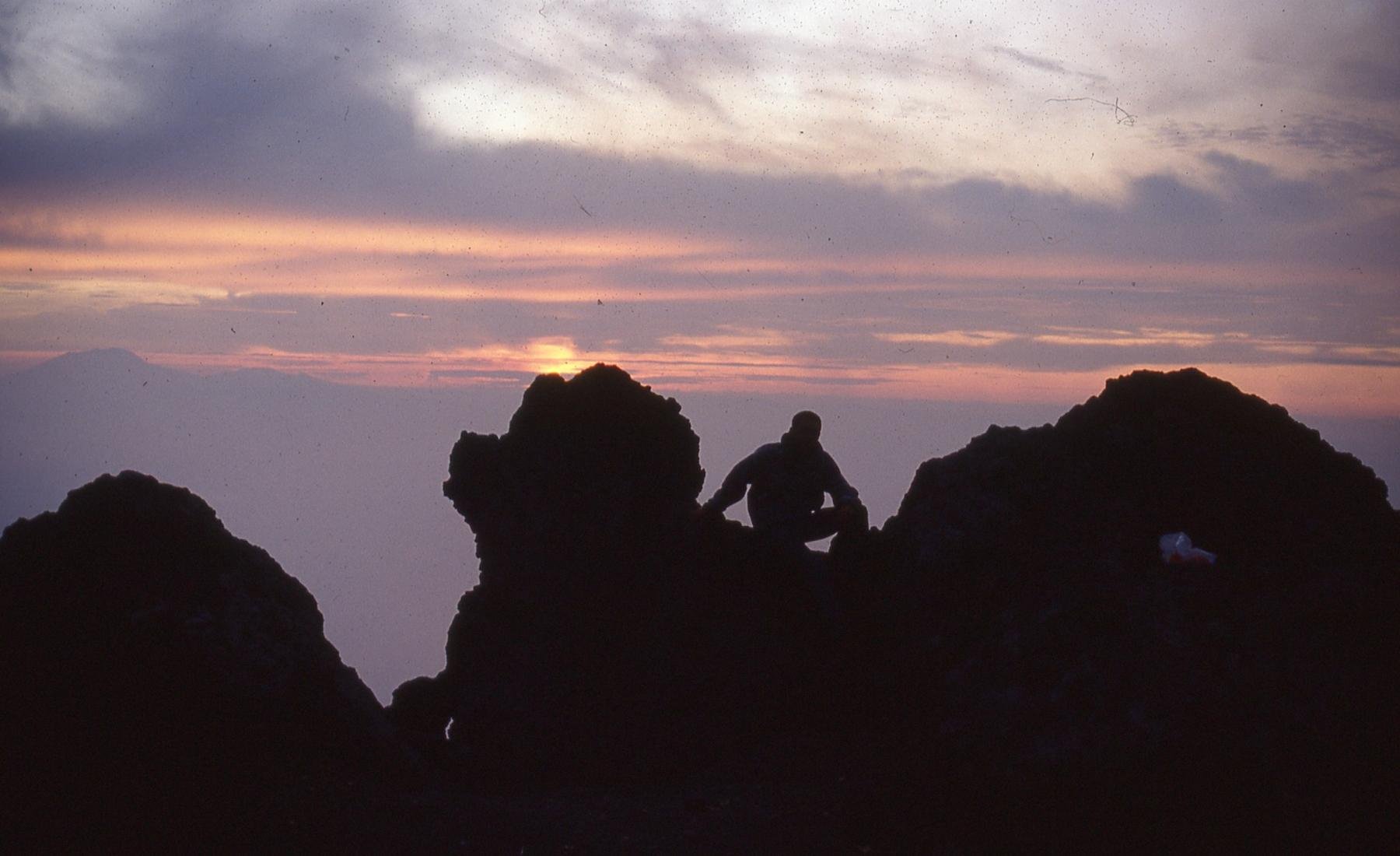 Everyone hangs their backpack and then we go on the Merapi! The first twenty minutes, I walk quietly, halfway through the group, on a road paved according to Indonesian standards, fairly easily. Then we walk along and through a dry channel. I'm glad it doesn't rain. Along sawa and cane sugar fields we reach the first resting point where we keep still for five minutes. I take a few sips of water and wonder if I shouldn't have taken two bottles with me.

Further up the "path" becomes increasingly difficult and steep. The group splits automatically. The French-speaking and English-speaking couple and the German girl are the stragglers. For a moment I also consider joining the followers, but actually I am quite good at this pace. The route now runs straight through the bush. A few times I hang with my backpack behind fallen trees. The "path" here is also dotted with tree roots. One time I hang on with my foot and barely stay on my feet.

A long rest at half past three. From the resting point we look out over Magelang and another large city. I thought Yogyakarta, but the guide says Solo. I take the first photos. Always two from each view, once 3 seconds, once 6 seconds. Do not know the trick of the machine yet. I wonder if something sticks.

After twenty minutes of quiet and intense rest, the command "Up" sounds and the leading group of five, accompanied by the two non-English speaking guides, walks further up the Merapi. One guide in front, then the German couple, then nothing, then the silent German, the Englishman and I and the second guide at the back. The Englishman and I find support on our agony. The "path" is not even that anymore and we have to watch out every step to avoid slipping or going through the ankles. When the enormous gradient is sporadically interspersed with five steps 'Hollands steep', I occasionally imagine myself on the escalator.

Around half past three rest again. Hiding behind boulders, the wind is strong and cold, I slowly catch my breath. The guides always seem to take a nap at every break. Ma's grape sugar is boosting the blood levels of the Englishman and me again, so that in theory we can continue.

The climbing is getting heavier. My knees have long said that continuing is crazy. My heart pounds the oxygen through my body and the Englishman whips me up again: "Come on, we have paid for this!".
The German couple seems to have pepper in the ass, they are now out of sight. During the last rest they refused to take a break and, as it were, dragged one of the guides upstairs.

About twenty roadside tourists are sleeping on the last plateau below the summit. It is a quarter past four and the last stretch, steeply against the lumps of lava, will take about an hour.

The climb is degrading. I move up with my hands and feet. Toiling every meter is followed by sliding back half a meter. Every step hurts toes, sole, calves, but especially my knees. The backpack feels like 50 kilos of cement and with every mistake I consider leaving it behind.
Bob, the Englishman, and I are pushing ourselves up with foreign force. You cannot stop here, so close to the goal. With the snot in front of our eyes we reach the crater rim at ten past five, an imposing deep, steep hole of about 100 by 25 meters. The top of the mountain is a good stone's throw away.

It is now dawning in the East. A mysterious red glow next to Gunung Lawu, a mountain peak about 200 km away. The sun is barely visible and I rush to the top. What I see from there is more beautiful than Nirvana. The sun slowly but surely crosses the horizon. With tears in my eyes I feel intensely happy to experience this. On top of the most active volcano in Indonesia, in a chilly and bleak wind, the newborn rays of the sun caress my face.

The sun plays a cat-and-mouse game with my Merapi and the western mountain Gunung Sumbing: on Sumbing the shadow of Merapi diminishes, until after 10 minutes she is fully in the sun. In the north, the Merbabu is grand and imposing. In the south, Yogya is awakening under a blanket of clouds.

Only then do I see that the Merapi is alive. I stand at the edge of the working crater and steam comes up from every nook and cranny, covering the glowing lava with a thick mist. I feel an indomitable need to piss over the rim, into that big gaping mouth. Then think with satisfaction "I did the Merapi, and pissed her in her mouth". A feeling of victory. The Merapi taken back for all the pain and degradation she has done to me. And will still do, because we still have a long way back. 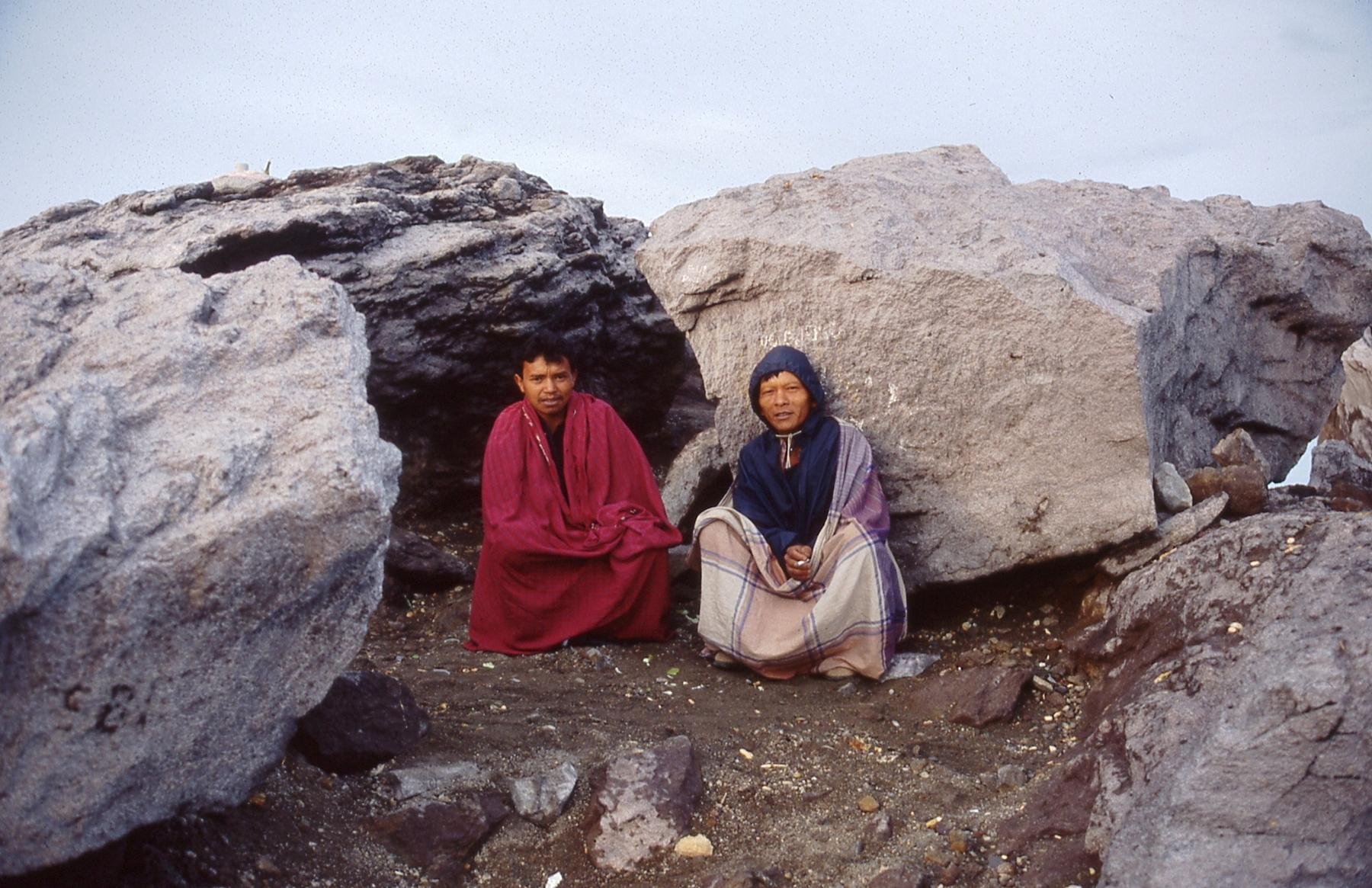 I peel my apple, quickly save a pound for the way back, and share it with the Englishman and the two guides. Also turn them into a Samson before they mercilessly blow the retreat.

With descending knees I descend again. The efforts are now less heavy, but the blows on the ankles and knees are very hard. Halfway between the top and the last plateau, the German girl and the male half of the English-speaking couple are still climbing up. We give them another heart by boasting about the view and descend at a killer pace.

The guide dances down the mountain like a ballet dancer. We, rude as Europeans are, are after it. The descent is getting warmer and smoother, Bob and I regularly slip in turn, especially when we slide over a loose split. The pain from the blows to the joints force us to take regular breaks. During one of the stops, a native boy with a basket and scythe passes us in an upward direction. Bob jokes if he would have paid 20,000 rupiah for the tour.

Around eight o'clock we reach the 'paved' road and it is an easy half hour back to our starting point in a 'cheep-cheep-cheplock-cheplock' pace. I use the mandibak outside to rinse hands, feet, face and chest. then I start breakfast: even stickier sandwiches, triple with sprinkles, a hard boiled egg and pineapple. We wait until about ten o'clock the stragglers have returned to base, tired but satisfied. We get into the van and bump, sleeping with our noses against the windows, back to Yogya. In the end, I still fall into the pool, drink a beer, crawl into bed, think aloud: "I did the Merapi and pissed her in her mouth" and immediately fall asleep.
≡