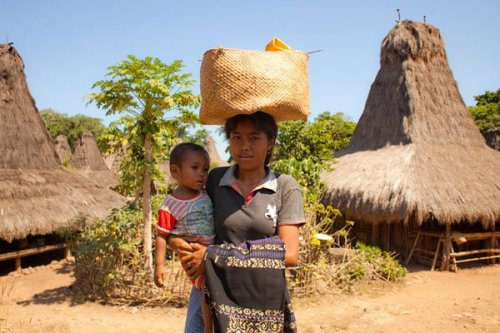 The dry and mountainous island of Sumba (formerly called Sandalwood Island by the Dutch) is one of the Lesser Sunda Islands of Indonesia. The island measures 210 km by 40 km with an area of ​​11,153 km².

Sumba is a relatively isolated island with no clear economic prospects.

Sumba is part of East Nusa Tenggara province and consists of two regencies: West Sumba with Waikabubak as administrative capital and East Sumba with Waingapu as capital.

It ranks fourth on the list of the poorest areas in Indonesia. Culturally, however, it is one of the richest islands, where tradition (adat) still plays an important role everywhere. It is one of the last areas on earth where animism (a natural or natural religion where spirit and ancestor worship are most important) is still fully present.

Sumba is located on a no longer active volcanic belt formed by the islands of Sumba, Savu, Roti and Timor. A flat strip runs from east to west along the north coast, which is barren, dry and stony almost everywhere. The strip is broad in the east and narrower to the west. However, at Cape Sasar in the north, the mountain range extends to the coast. In the west near Kodi, the island consists of a wide coastal plain.

The entire south coast is steep, the mountains come close to the sea. Only a single river breaks through the mountain ridges to form a wide fertile plain (Lamboja and Wanokaka). There are some motorways, but in general the island is difficult to travel.

Sumba is the name given by the inhabitants themselves to their country. The tradition says that one of the first founding fathers Oemboe Waloe Mandokoe, had a woman named Humba. Oemboe, who arrived in a pirogue, called the island after his wife Humba.
Sumba was already inhabited between the 3rd and 5th century. At Melolo weapons and metal tools from that period have been found. The island was totally isolated until in the 11th century Arab traders visited the island.
In the fourteenth century, Sumba was under the control of the Majapahit dynasty of Java.
Then Sumba was under the influence of the Bima on Sumbawa and later on of the Gowa on Celebes.

The island was first visited by Europeans in 1522.

The island was known for its Sandalwood at the time. This wood is now only very scarce and the export has been banned since 1914. Until the discovery of the penicillin Sandalwood was the only remedy for venereal diseases and therefore very expensive. It was exported in large quantities to Europe, the Arab countries and China. There was also trade in wood, horses, betel nuts, fruit and ikat.

The first contacts with the Netherlands date from 1754. Around 1838 the island has a history of piracy, beach robbery and slave trade. The Dutch government did not want violent action (as requested from Timor), but rather a "policy of friendly relationship".

On August 31, 1866, the Dutch were in control of the island. The line of conduct was that the population was left under the management of its own heads (rajahs). Direct interference from the administration should not take place. People were allowed to give advice and give directions that were useful and beneficial, but should never give orders. The reason was that the Netherlands lacked the power to enforce obedience.
Only under Van Heutz in 1906 the island was "pacified", that is, occupied by Dutch soldiers and the power of the Rajahs declined. In 1913 the military authority could be replaced by civil authority. An inspector assumed authority, a few years later replaced by an assistant resident.
The influence of the Dutch administration was only visible in the accessible areas. Most of the island was inaccessible and retained much of the original culture.
The island was divided into districts and sub-districts that were often placed under local government. The classification often coincided more or less with the linguistic boundaries. It was not until 1933 that it was so quiet that the military could be replaced by ordinary police.

After the declaration of the Indonesian state, the central authority of Indonesia in 1950 took over the island. Although the power of the local rajahs and their relatives was not recognized by Jakarta, many were given a function in the new order and thus retained (at least a part of) their powerful position they had always had.