Off the south coast of Bali are the 3 islands Nusa Lembongan, Nusa Penida and Nusa Ceningan. This building block takes you to Nusa Lembongan, from where you will explore the islands and marine life. Nusa Lembongan is easily accessible by fastboat from Sanur. Once you arrive on the island you will be surprised by the relaxed atmosphere of the island. There is hardly any traffic and a lot of white beach, interspersed with rugged cliffs. 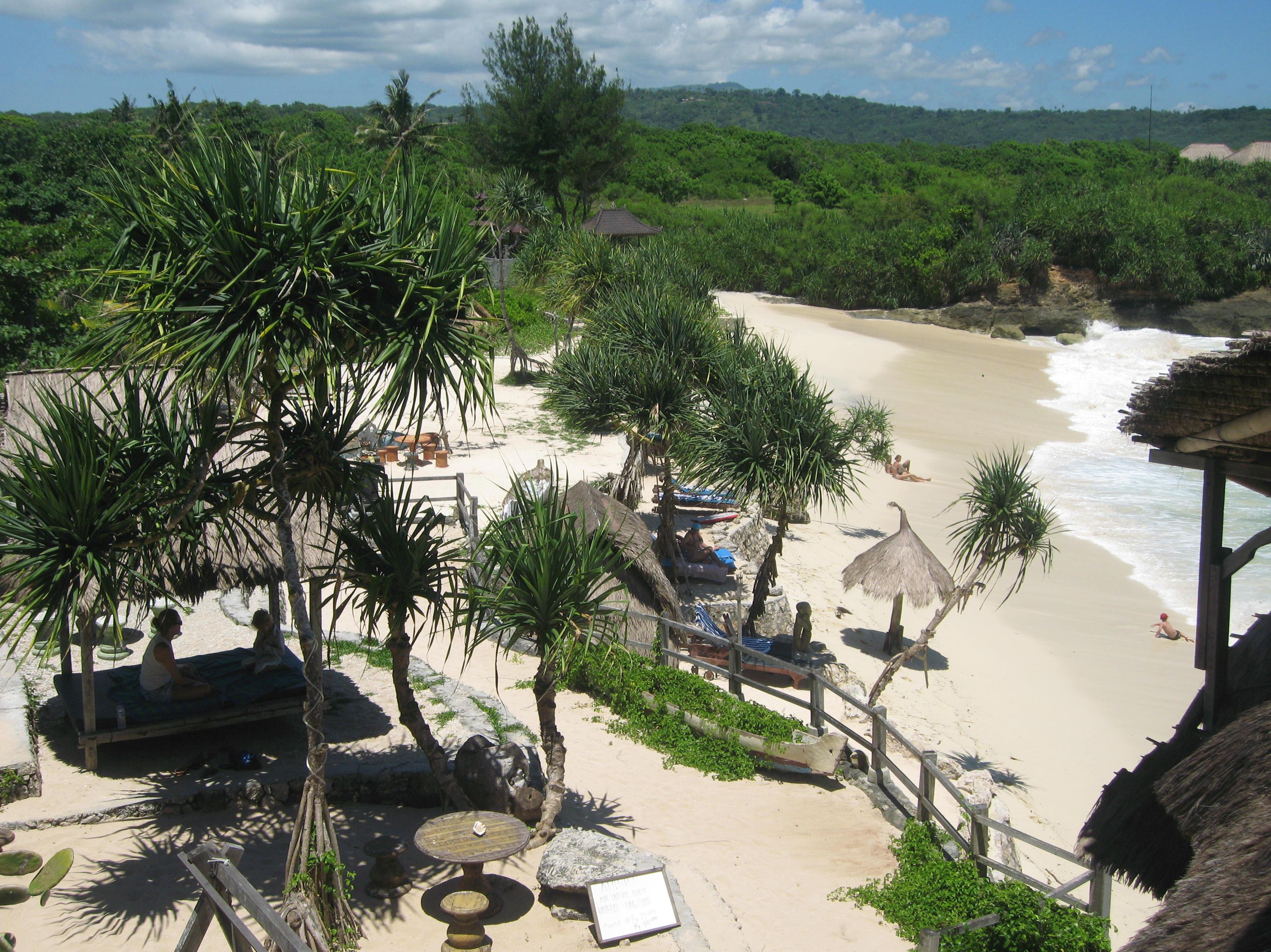 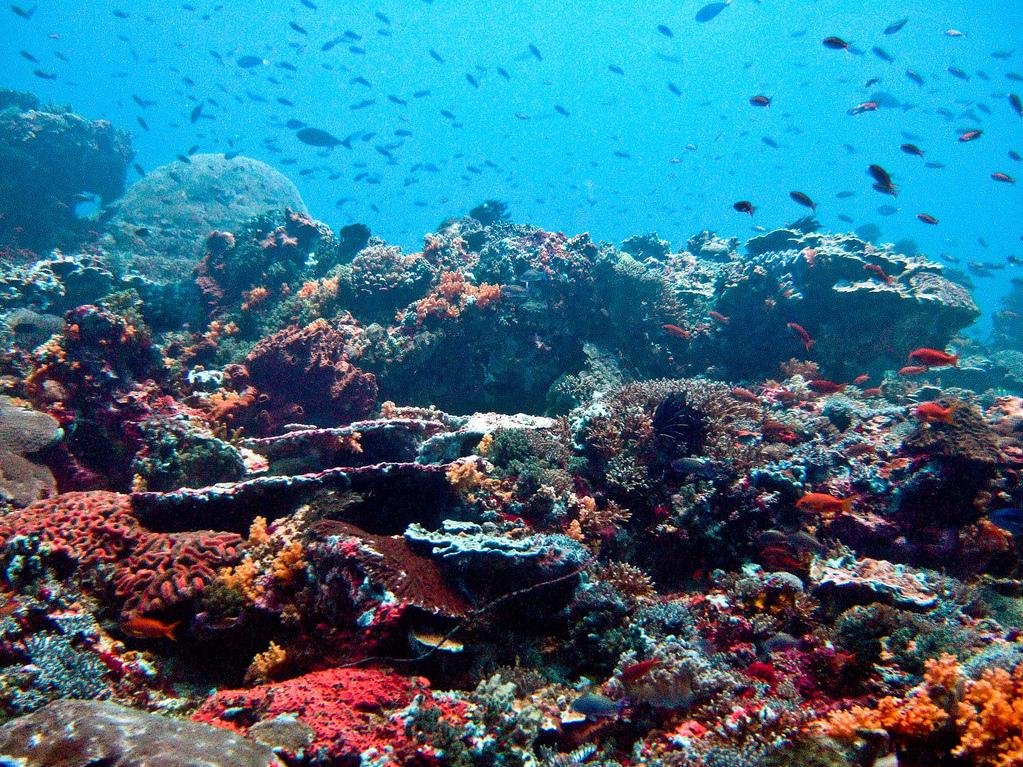 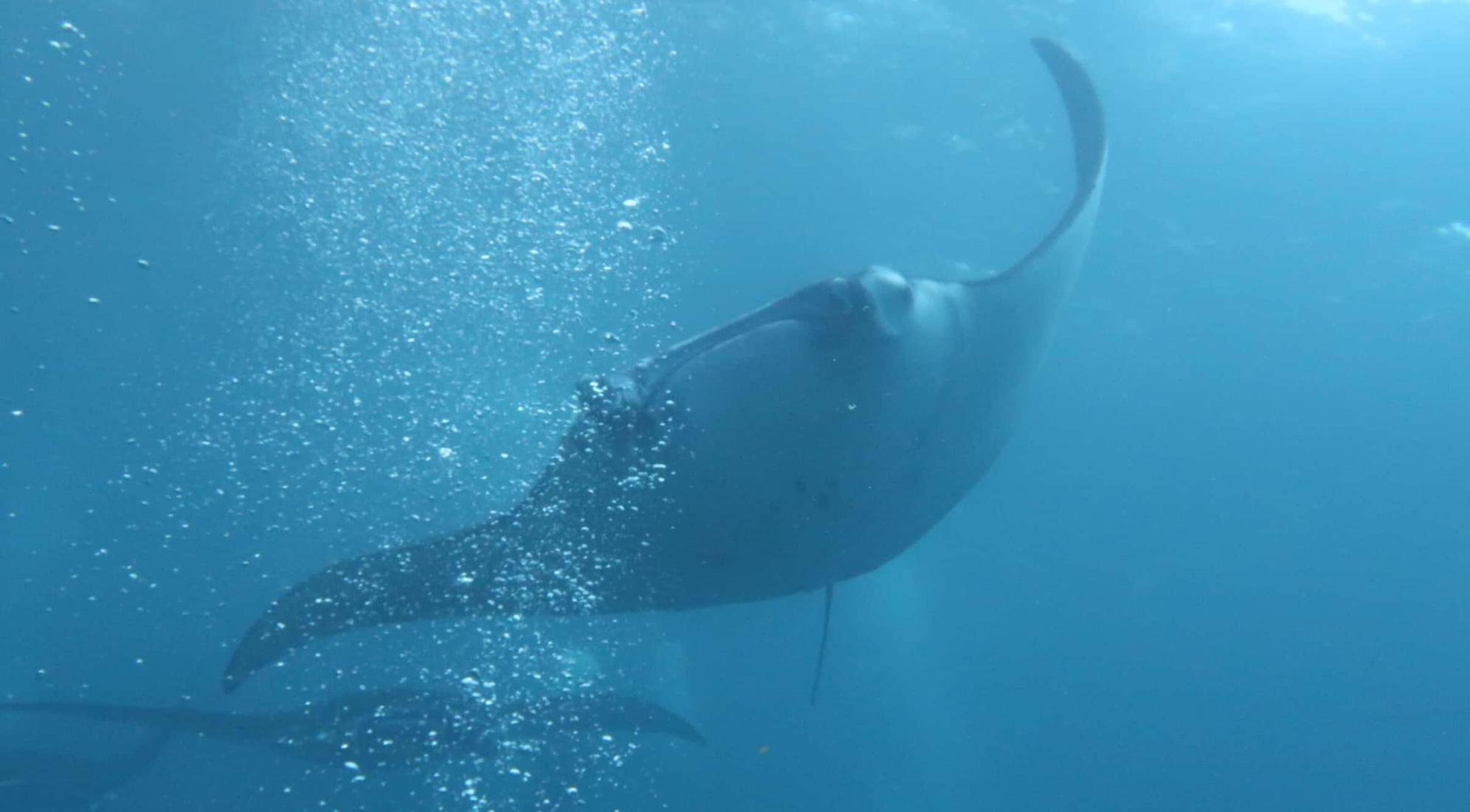 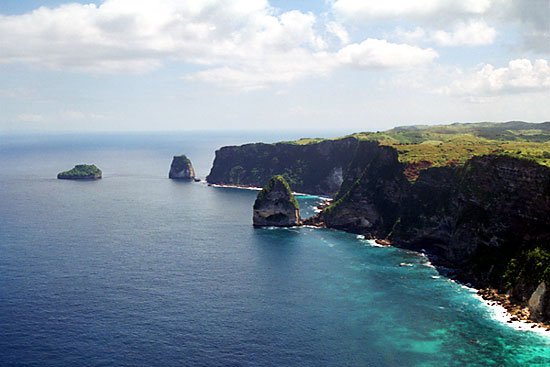 Target price € 350 per person with 2 participants

Included in the travel sum:
•3 nights in a hotel based on a double room including breakfast. Price based on Dream Beach huts, Deluxe seaview room
•Crossings and transfers
•Snorkeling excursion 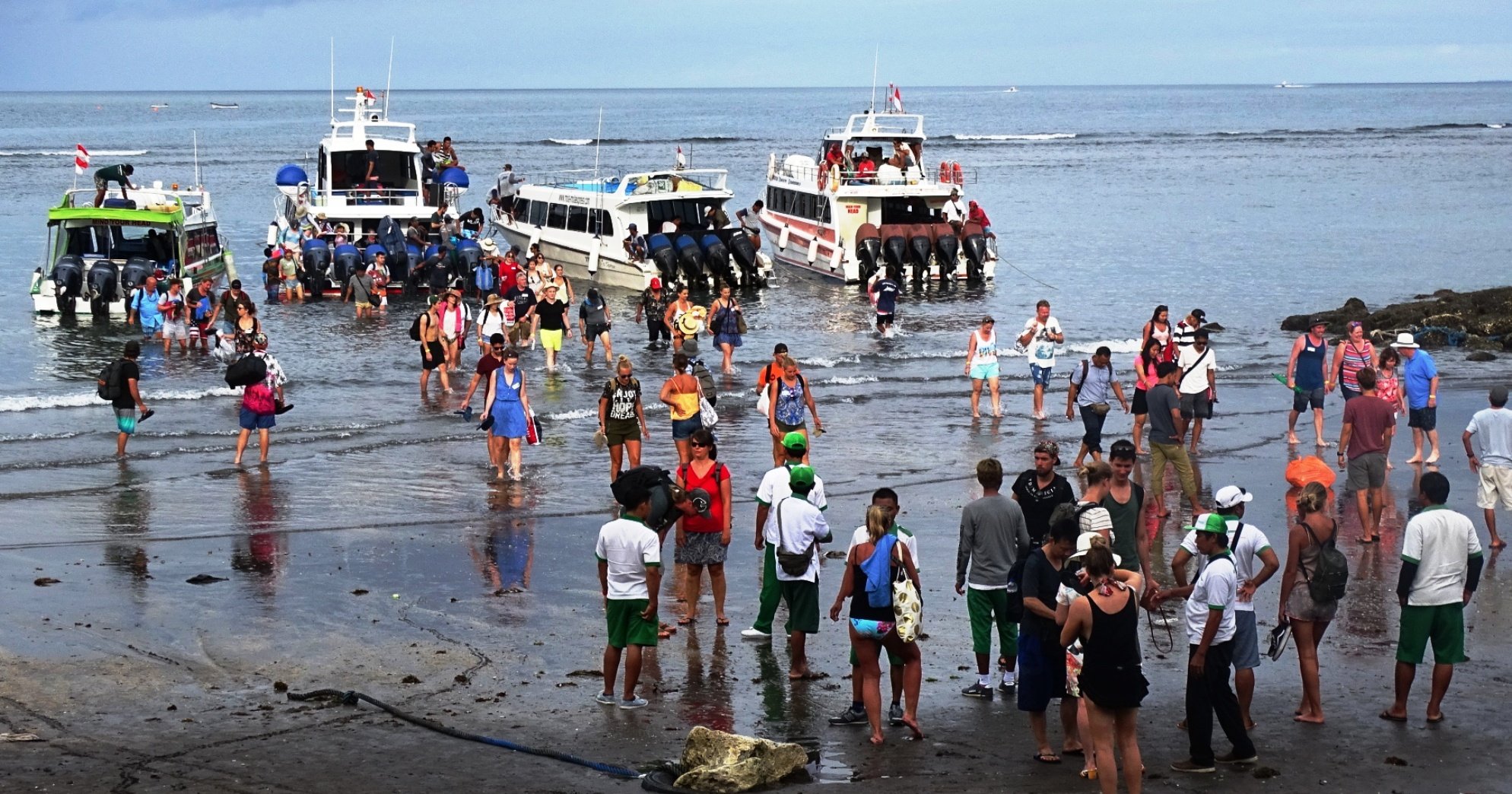 Underway from north to south Bali you’ll experience a day full of beautiful pictures of enchanting Bali. We start with a walk through the beautiful rice terraces of Munduk. Then we have a short stop at the impressive Git Git waterfall and continue through the mountains to the fruit market and temple of the village Bedugul. About an hour from there you see the monkeys around the temple of Alas Kedaton. Once we’ve arrived on the peninsula Nusa Dua we get on the boat in Benoa to go to Nusa Lembongan.

After breakfast you, possibly with other guests, board the speedboat and take a day trip along the other islands where you discover the underwater world while snorkeling. At Manta Bay you will swim among the manta rays. Christal Bay offers beautiful gardens with soft coral and various table corals, while the colorful schools of fish and fish at Gamat Bay and Toya Pakeh abound.

There is nothing on the program for this day. Nusa Lembongan is very quiet, so you can rent a scooter and explore the island. Discover the many beaches with names such as Dream beach, Jungut Batu beach, Secret beach, Blue lagoon or Sandy bay and see the waves crash high against the rocks by Devils tear. If you drive via the Yellow bridge to the island of Nusa Ceningan, be sure to take a look at one of the seaweed farms. You can also book a day trip to Nusa Penida locally. This island is slightly larger than Nusa Lembongan and has many rugged cliffs and hidden white sandy beaches. 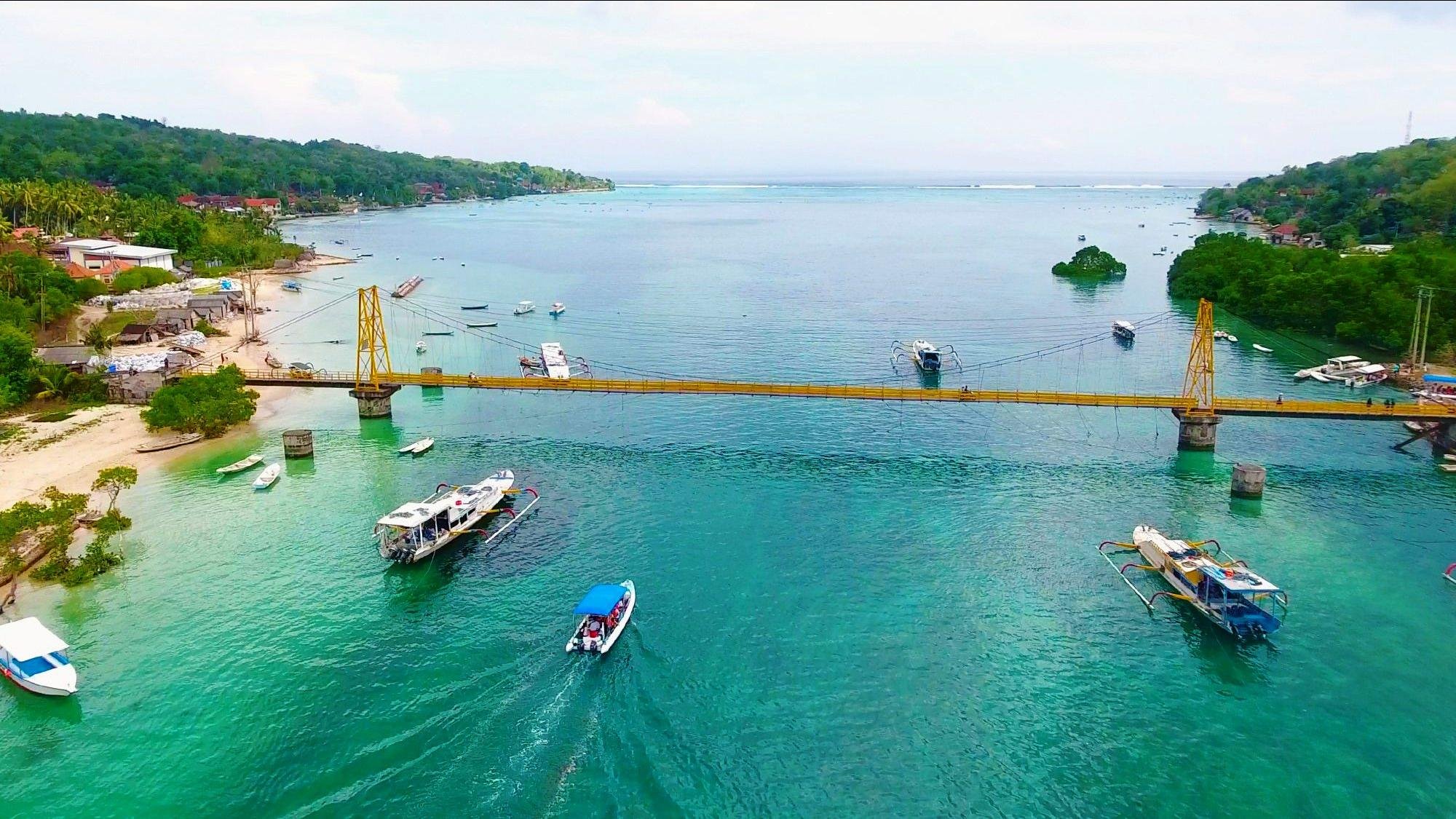 With the fast speedboat you sail back to the ‘main land’ of Bali. Your driver is already waiting and will drive you to your hotel.
Offerte
Offerte

On the bounty island of Lembongan, only half an hour by boat from Bali, lies the small-scale Dream Beach Huts. With 21 rooms it is a cosy resort, right on the beach in the southwest of Lembongan. Our favorite rooms are the Deluxe Oceanview. All rooms have air conditioning, minibar, shower with hot running water and a small private terrace. The resort has a reasonable restaurant and a nice pool. Snorkel excursions are organised, including to Manta Point (approx € 30 per person). meer info more info Informations supplémentaires 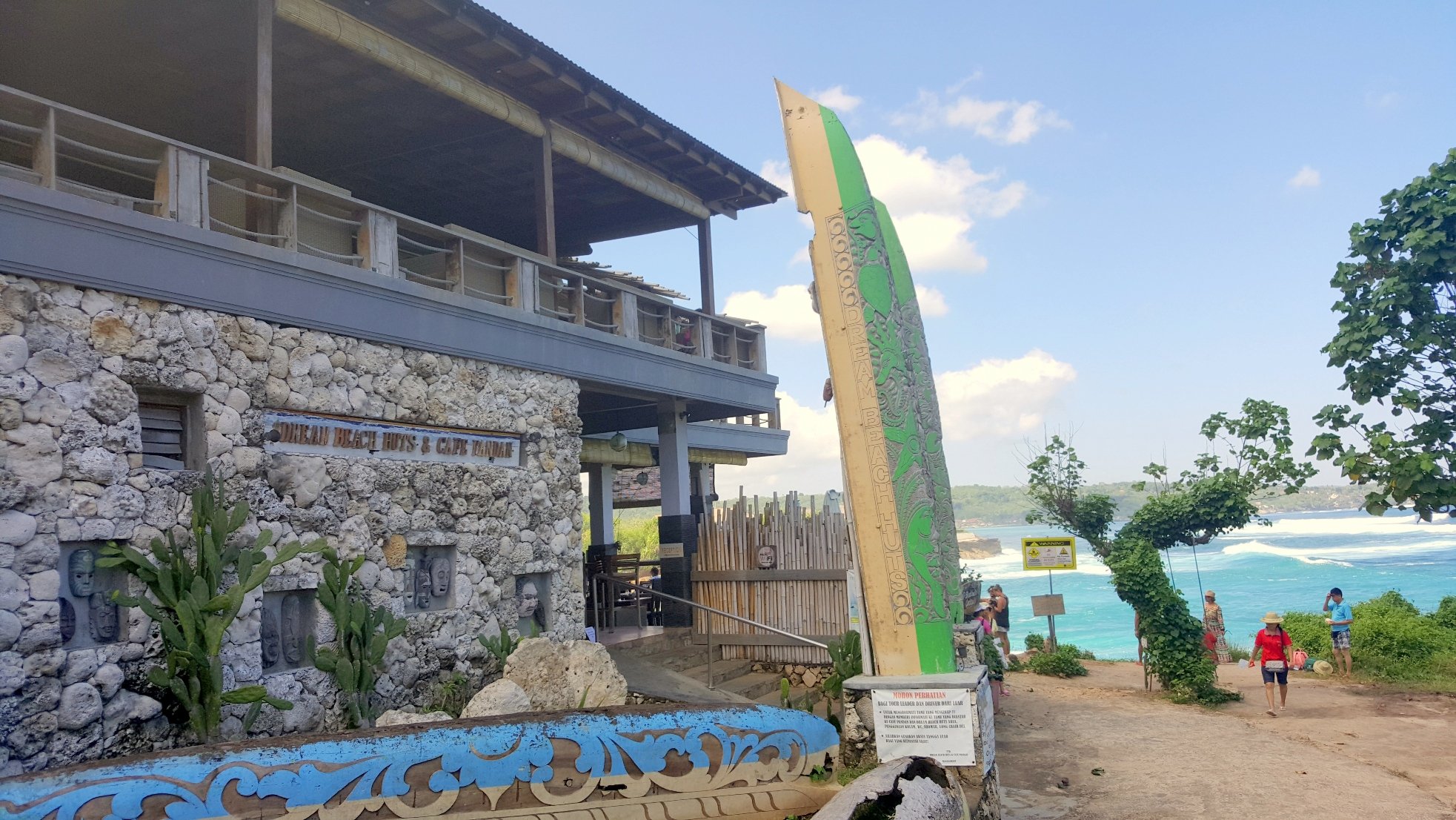 The beautiful Lembongan Beach club & resort is located directly on the beach of Jungut Batu on the island of Nusa Lembongan. The resort has only 26 villas and is wonderfully luxurious and equipped with all comforts. The water around Nusa Lembongan invites you to surf, snorkel and dive, while the resort offers you all possibilities for a carefree and relaxing holiday. All villas have private terraces and are equipped with Satelite TV, DVD player with USB, WiFi, air conditioning, kettle, hair dryer and safe meer info more info Informations supplémentaires 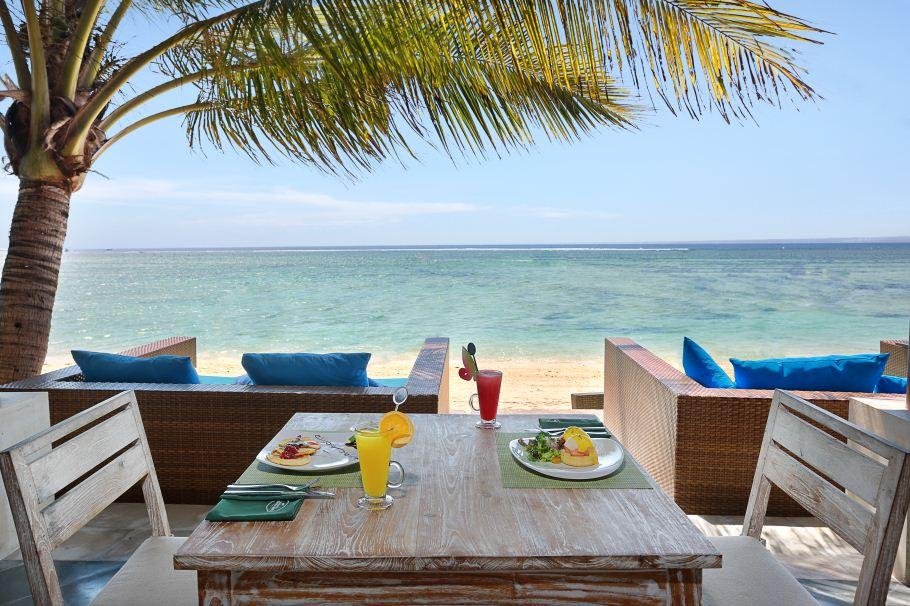 Via the Yellow Bridge you go from Nusa Lembongan to Nusa Ceningan. It is the smallest of the 3 islands and is less known to tourists. It has a beautiful but small beach at Mahana Point.

The Nusa is a paradise for experienced divers, with manta rays, sharks and beautiful corals. In the months of August to November you will also find the impressive and ugly Mola-Mola sun fishing here. Beginners should consider strong currents.
The food on the Nusa's is comparable to that in South Bali. Fresh fish is of course best when the fish is really fresh.

One day per year there’s no boat traffic around Nusa Lembongan. That day the islanders are busy praying because of Nyepi Laut. A quiet day on sea.

The date for Nyepi Laut is only announced one month in advance and is always on the day after New Moon. Nyepi Laut usually falls in September or October. 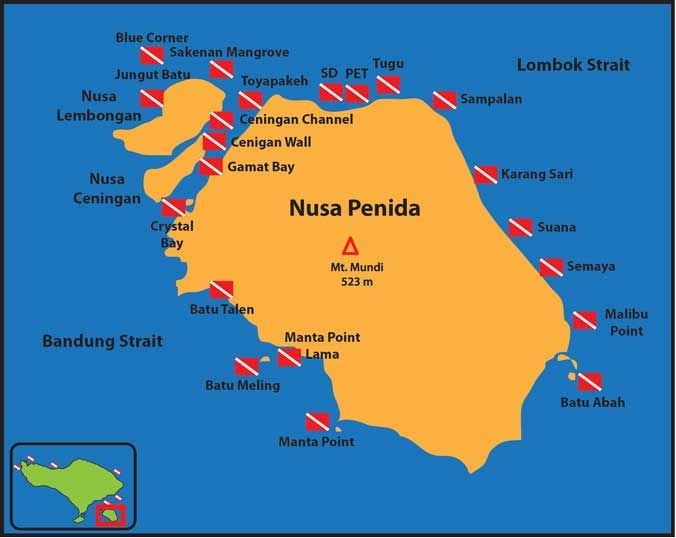 Diving at Nusa Penida and Lembongan islands is for somewhat more advanced divers. There’s often a strong current but the underwater world is certainly worth a visit. You’ll find here manta rays all year long. Majestic, non-dangerous and curious rays with a wing span of up to four meters. Also something for snorkelers, the rays swim very close to the surface here. 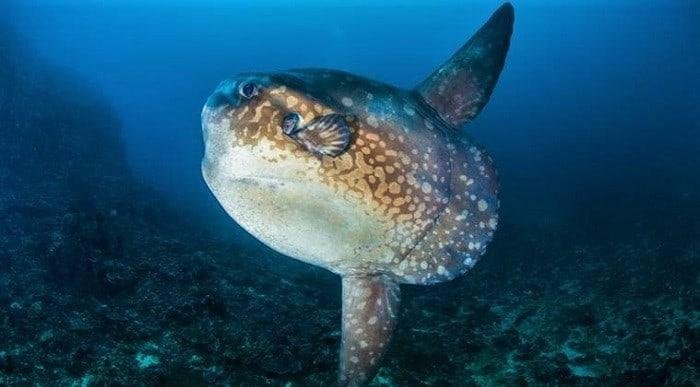 This is an exciting site for experienced divers only. The huge expanse of current-swept slopes at Blue Corner provides some dramatic topography. Dropping away to 50m, a series of overhanging terraces hide white tips and large black marbled rays and, as you approach the corner, schools of snapper and jacks regularly pass by. A great site for mola mola (ocean sunfish) during the season and other visitors include eagle rays, wobbegong, tuna and even the occasional shark.

This site is so-called due to its location, right by the mangrove area to the north east Nusa Lembongan. Mangroves offer a healthy sloping coral reef, with small bommies and table corals waiting to be explored for the smaller stuff but often marble rays and other larger species swim past in the deeper water. Sharks are occasionally seen here too. It’s a great site for all levels of diver.

Lembongan Bay offers the perfect introduction to diving. Due to its maximum depth of 10m and calmer conditions, it is an ideal site for less experienced divers, those wanting a refresher or for avid photographers. The sandy bottom is dotted with coral bommies which are home to frog fish, muray eels, schools of silversides, unicornfish and many more of the smaller species.

Manta Bay is a shallow bay with a stunning backdrop. Being rich in plankton it attracts manta rays all year round. The dive has a maximum depth of 12m and the coral bottom, with its gullies and swim-throughs, is an interesting distraction from the manta action going on above. Similar to Manta Point, we cannot get to this site every day, but it is closer and more protected than Manta Point, so is fast becoming a very popular dive spot.

Gamat Bay is a very small yet memorable site off Toyapakeh Strait. The steep, rugged reef slope is rich in hard and soft corals and is colourful down to more than 50m. Gamat is a dive where you don’t want to cover much territory and once you have navigated the slope, there are plenty of bommies, overhangs and small caves to explore as you head back into the shallows. 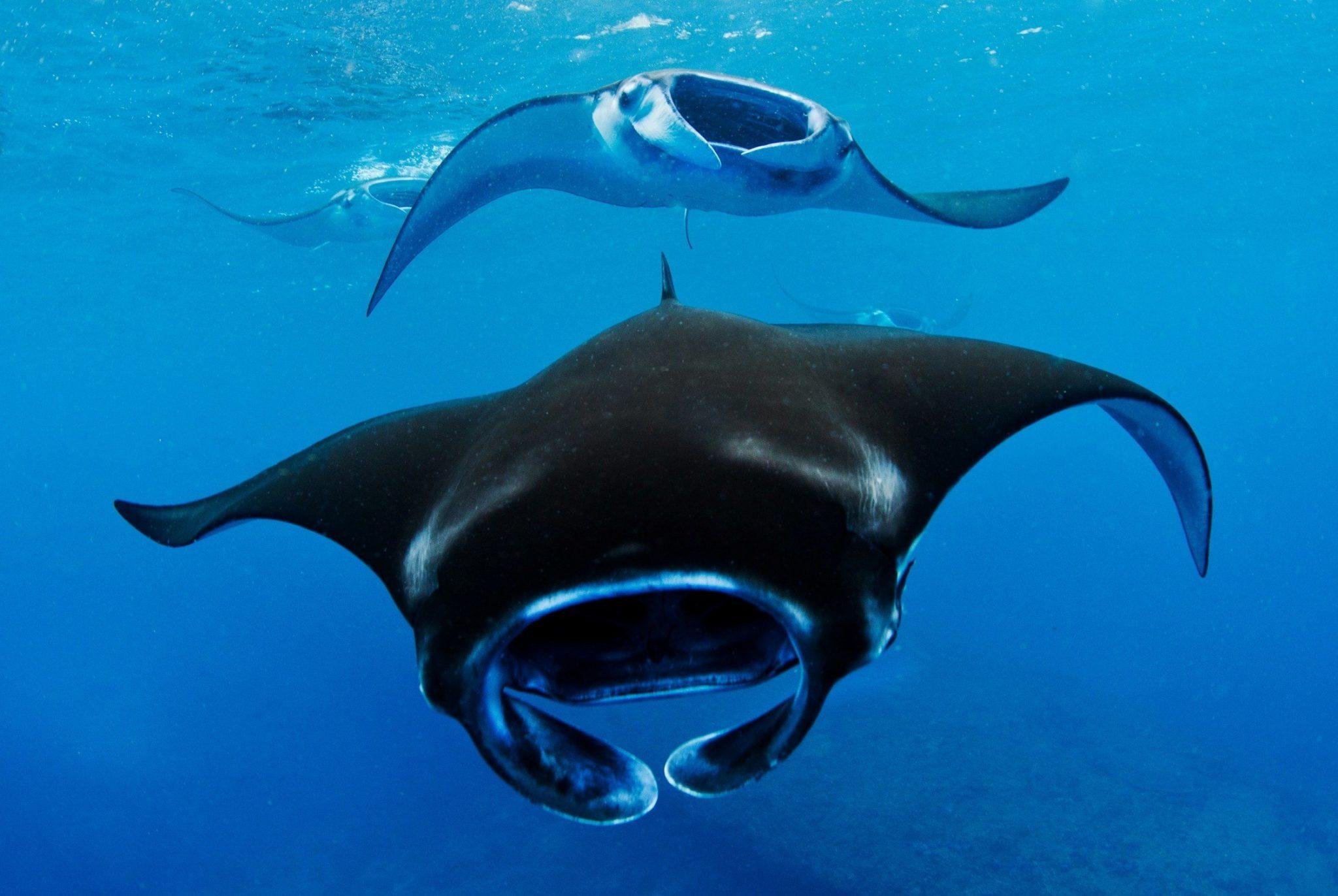 The site that made Penida famous! The plankton rich waters here attract the mantas all year round, sometimes seven or eight at a time, though even one is a fantastic sight. We rarely dive more than 15m deep at this site as along with the main attract of the mantas, turtles, nurse sharks, bamboo sharks and blue-spotted rays are regularly sighted at this depth, when the sea conditions are calm and favourable, it’s a dive to be savoured. 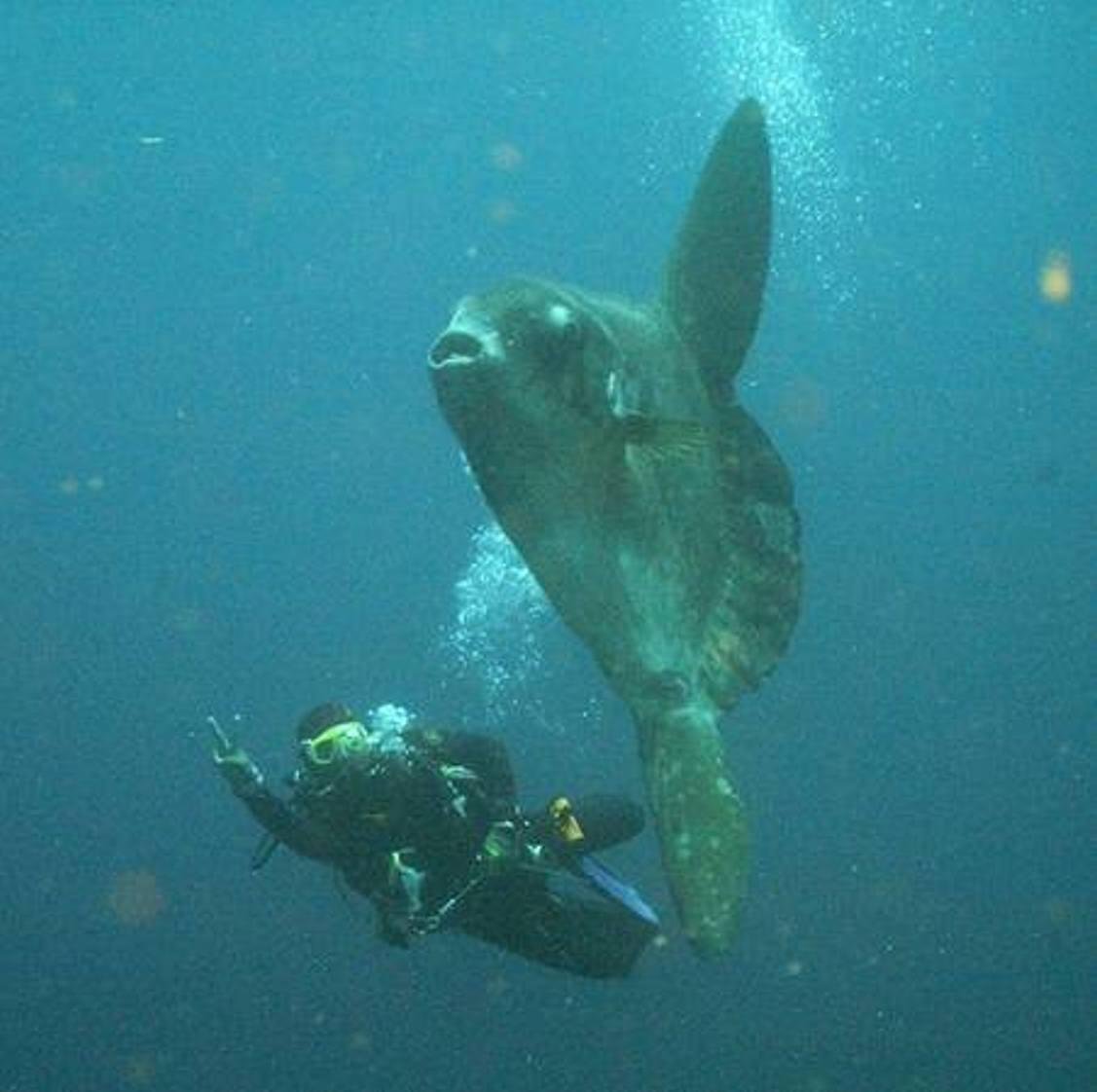 Also known as Penida Bay, the ‘Crystal’ in Crystal Bay refers to the fantastic visibility normally experienced here, which can reach over 40m on a good day. Crystal Bay is certainly one of the area’s most popular dive sites and is a favourite of the visiting mola mola (ocean sunfish) from August-October. The rock in the middle of the bay has very steep drop offs to the south and west and an amazing shelf in the north that is carpeted with wrinkled soft corals in the shallows. A healthy reef, an interesting cave, huge table coral and hundreds of fish of all shapes and sizes – there is not much that this dive site cannot offer! 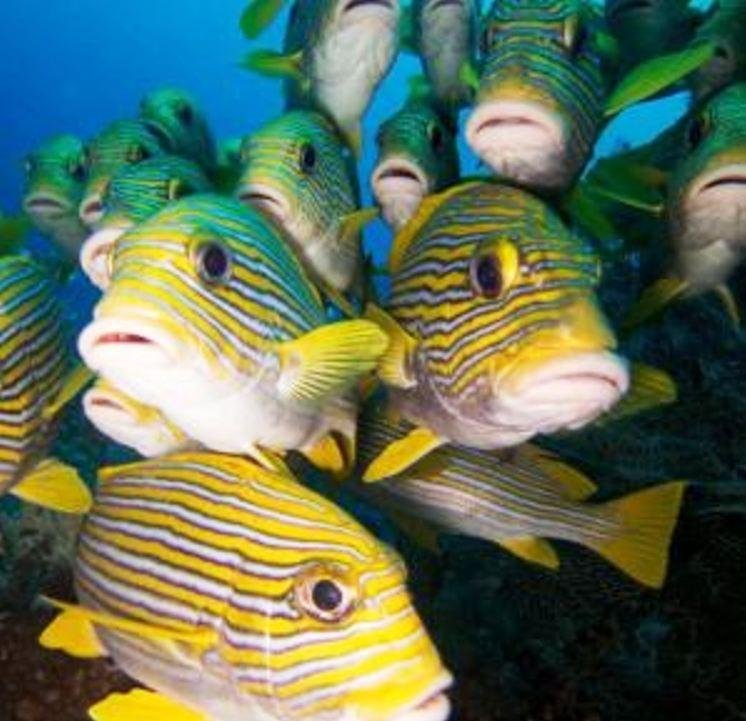 This impressive coral wall begins at the foot of the sea cliffs to the north of Ceningan and drops down vertically to a depth of 180m. Currents can be strong here and this site is reserved for experienced divers only. The wall is colourful with dense collections of multi-coloured soft corals and sponges making it fun to explore with plenty of nudibranchs to find. Sweeping out into the current along the wall are inquisitive eagle rays which occasionally join the dive groups for the tour, which winds through schools of oriental sweetlips and sleek unicornfish. 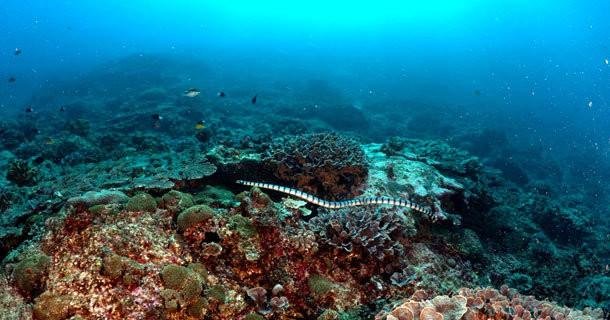 These three sites are found side by side on Nusa Penida and share similar sloping reef topography. The colourful reef is made even more interesting with big, randomly placed barrel sponges and coral bommies. Schools of redtooth triggerfish, fusiliers, butterflyfish and drummers compete for passing food that rides the ocean currents. Turtles, rays, sea snakes and the occasional mola mola distract divers from the multitude of smaller creatures hiding amongst the corals, such as scorpionfish and frogfish. 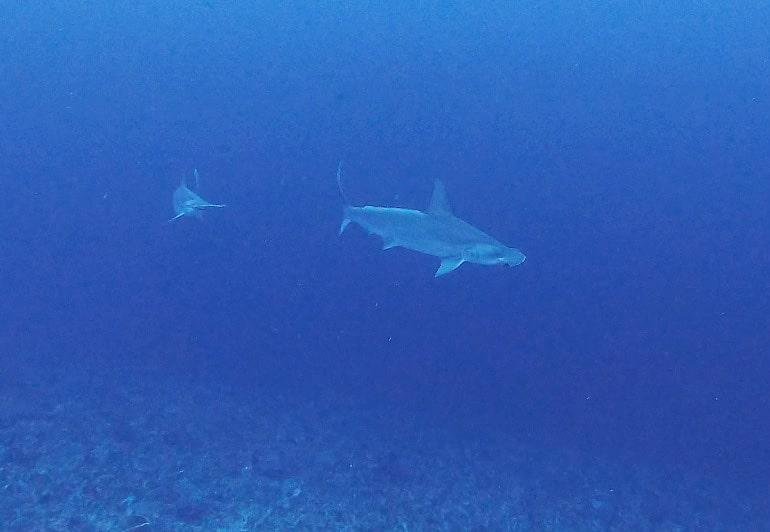 The ‘jewel’ of Penida, Toyapakeh means salt water in Balinese and is the richest site in Penida. It is a divers’ favourite as you often find yourself swimming through school after school of colourful fish of every variety, including the red tooth triggerfish, giant trevallies and batfish. It has a steep wall to the south, terraces with huge hard coral formations in the bay and a shelving reef in the north that drops off gently all the way to 190m! The density of coral, sponge and fish life is incredible, even the infamous pygmy seahorse is occasionally spotted here. All this plus occasional larger pelagics such as hammerhead sharks, mantas and sunfish. 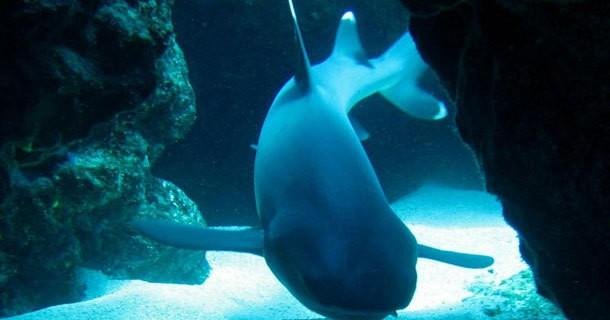 Sekolah Dasar means ‘primary school’, but when the currents are running, this site is not for beginners. Although less steep than Blue Corner it has large coral heads and currents that drift you past green and hawksbill turtles, marble rays, sea snakes, octopus, white tip reef sharks and the most diverse collection of corals and sponges in Bali. Not forgetting the resident school of batfish at SD that are almost always a certainty.
≡