The dive center Spice Island divers offers a 8-day package, including 20 dives. The dive centre is located in theSpice Island Dive Resort, close to the aiport and direct on the beach of the Ambon Bay.

Spice Island Dive Resort is set up with everything you need to explore your underwater photography journey. Our camera room provides ample space and individual stations for guests to prepare their cameras for their next dive.
Dive groups are limited to a maximum of 4 divers per dive-guide. Smaller groups can be arranged on request. 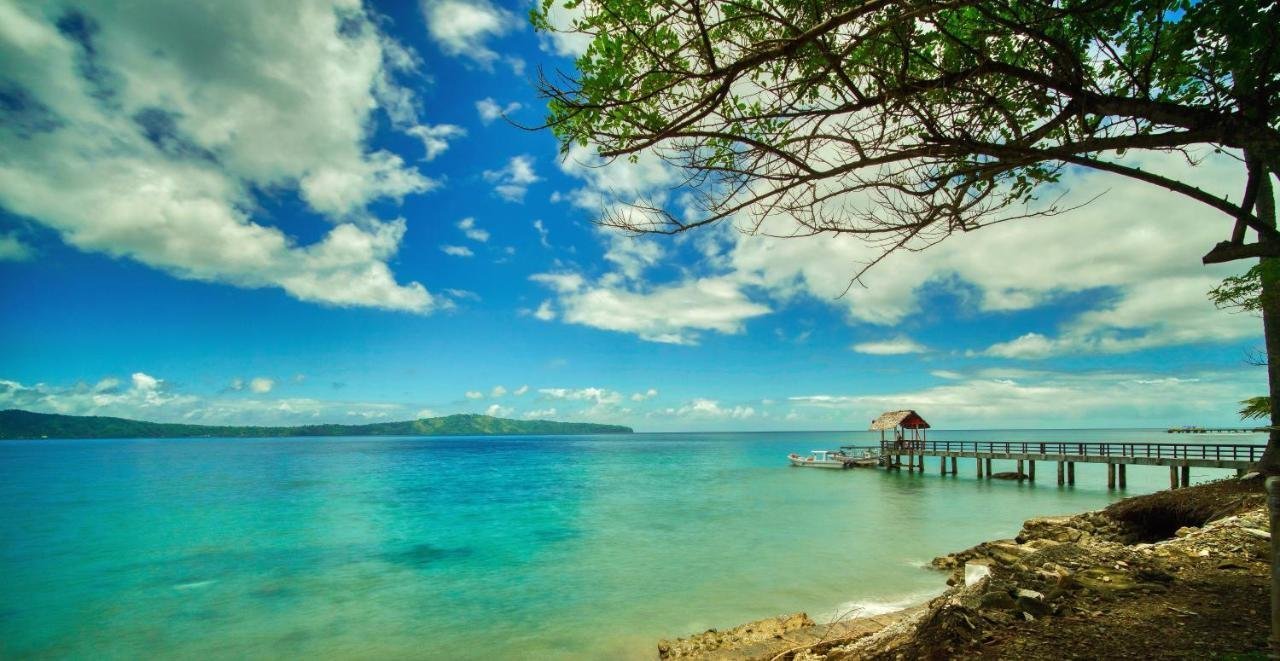 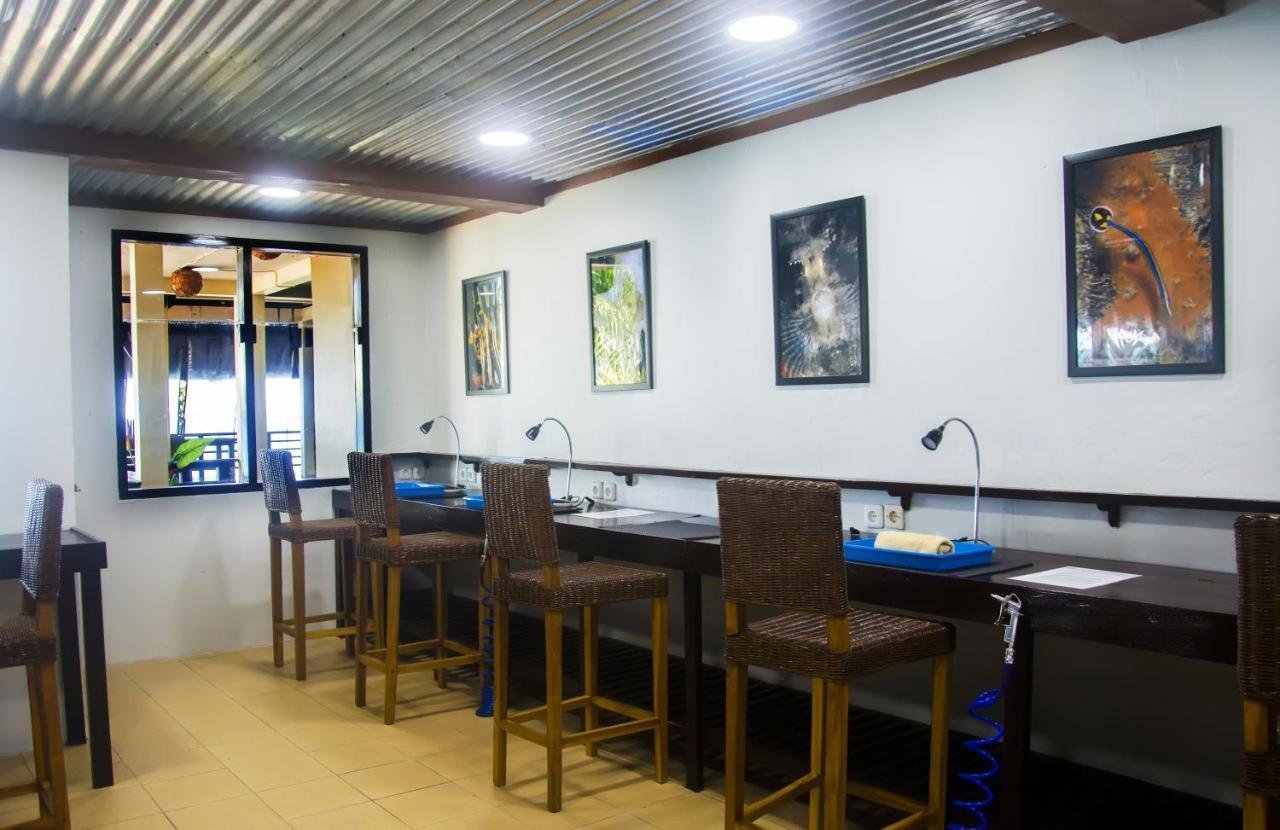 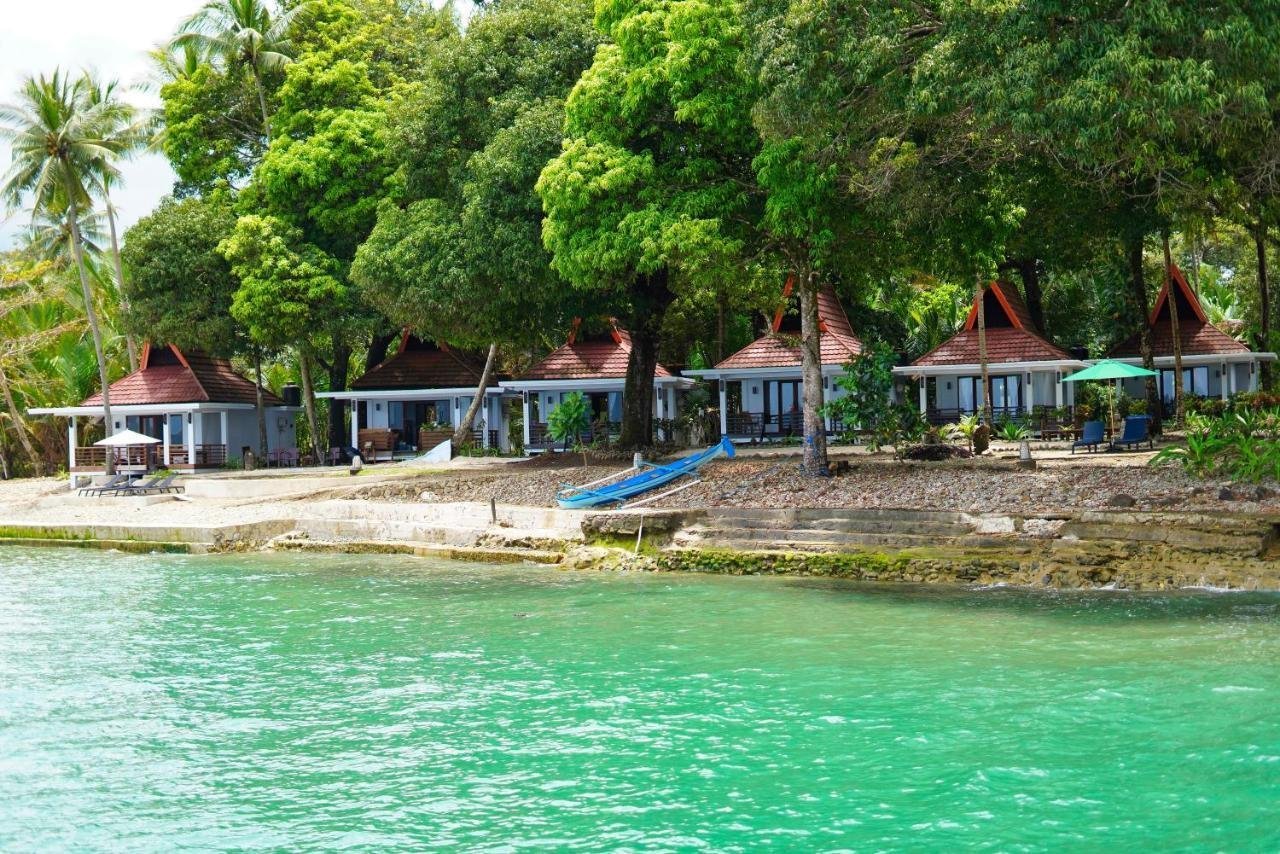 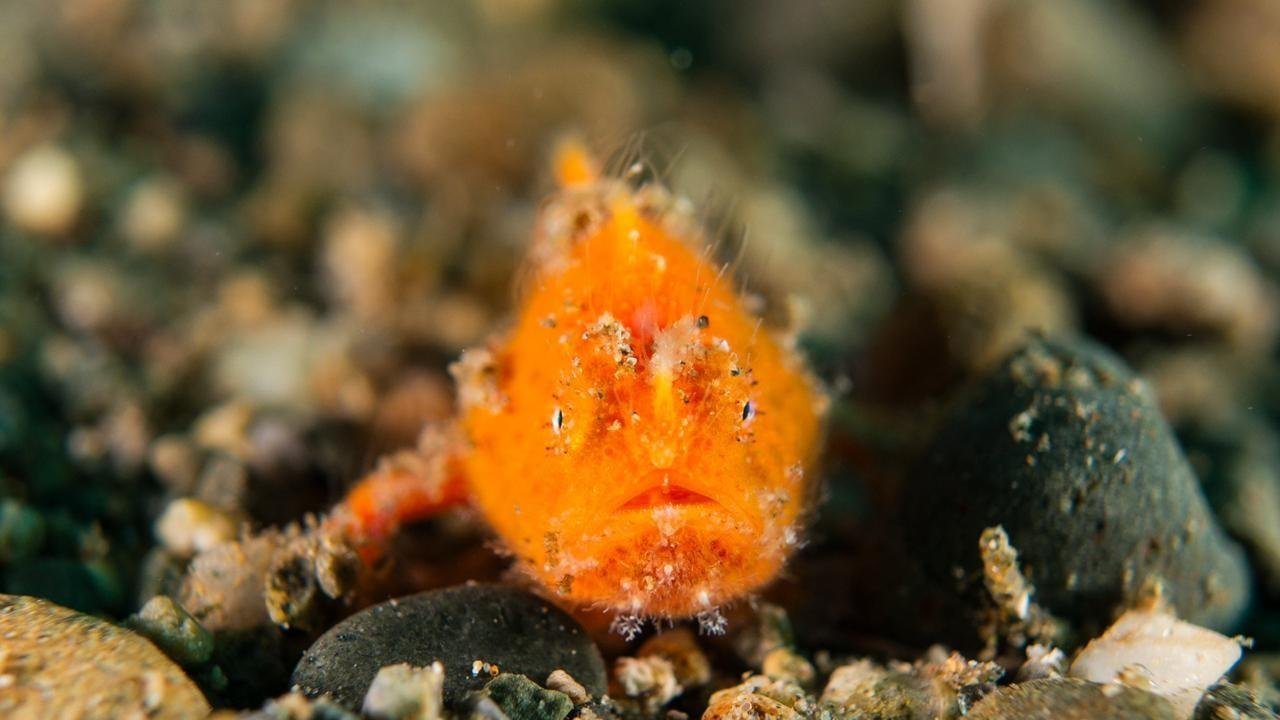 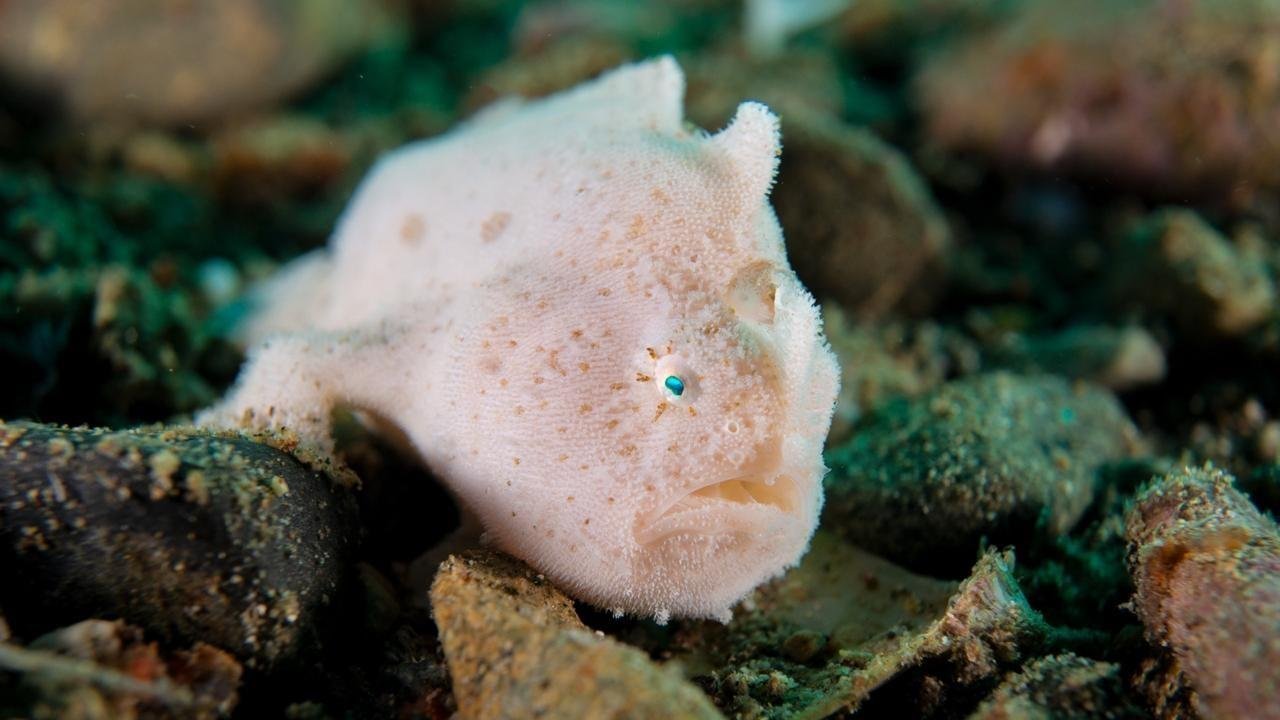 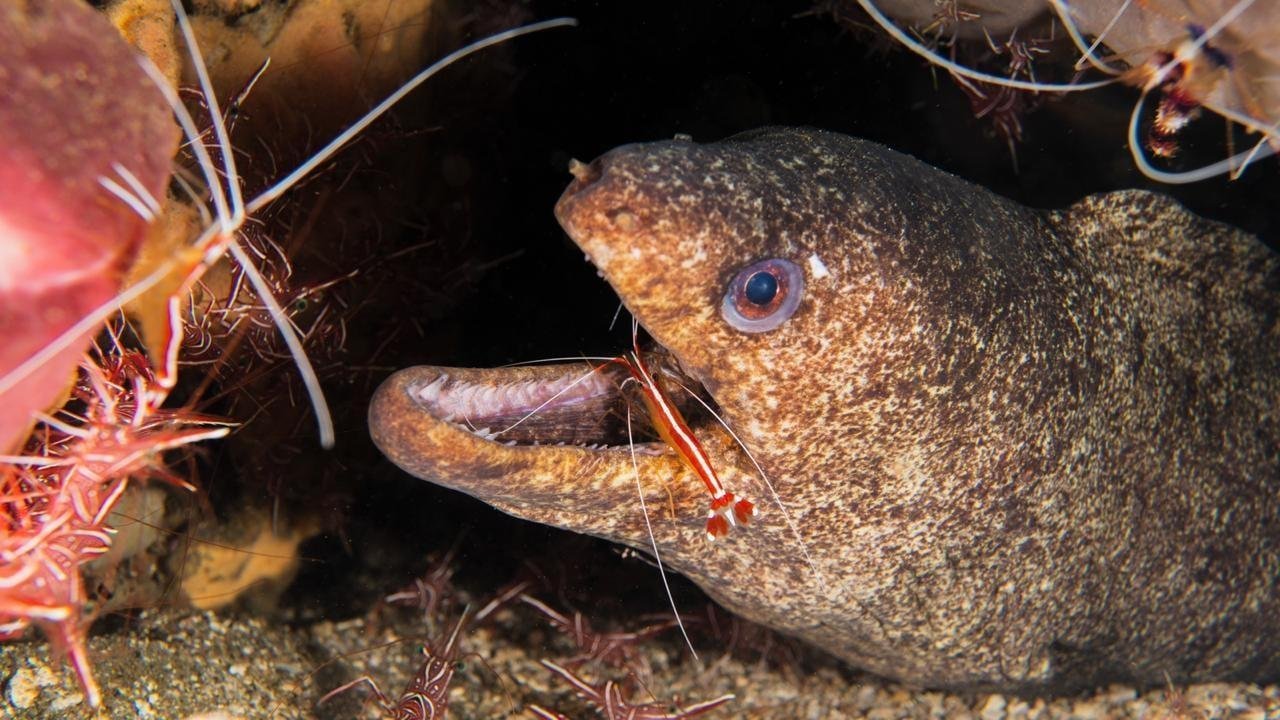 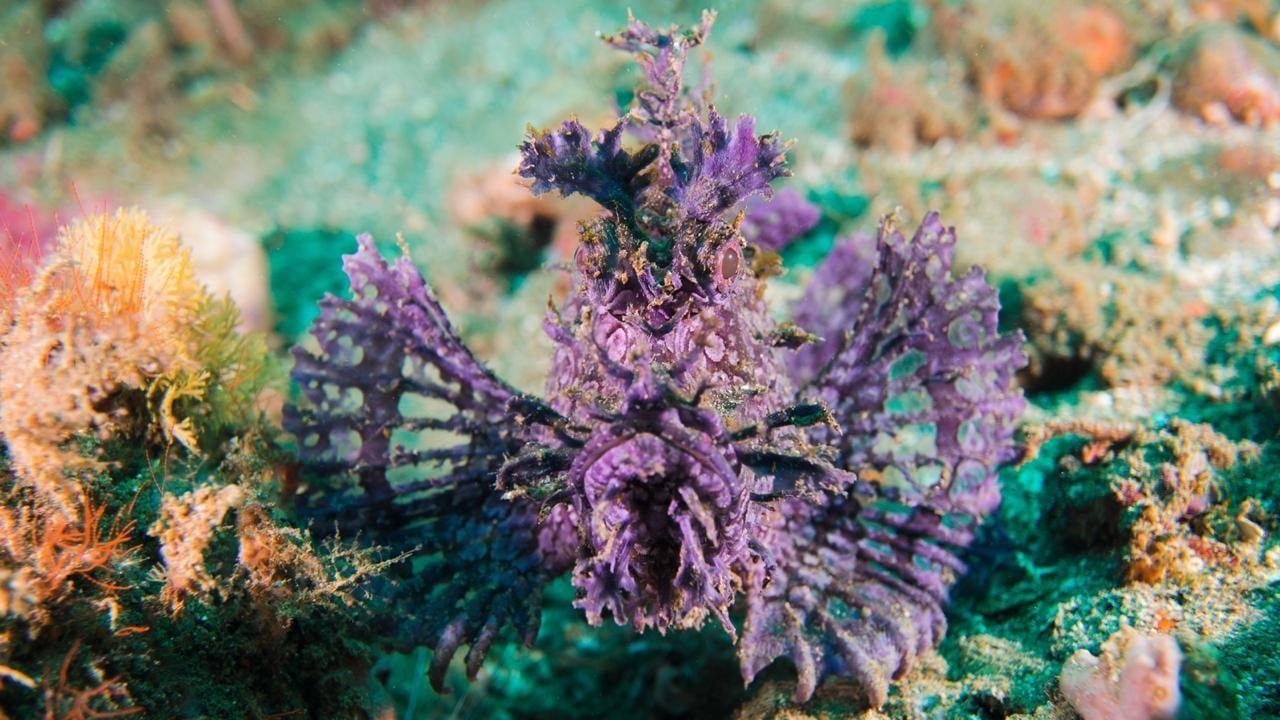 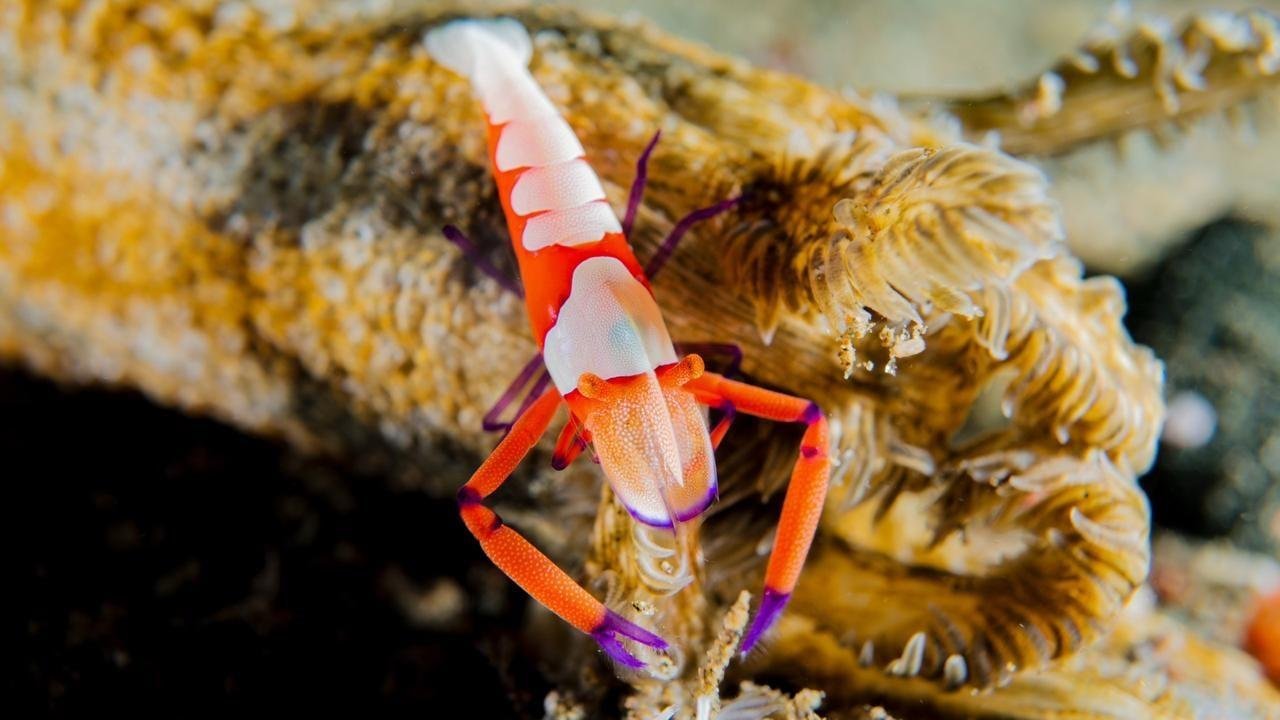 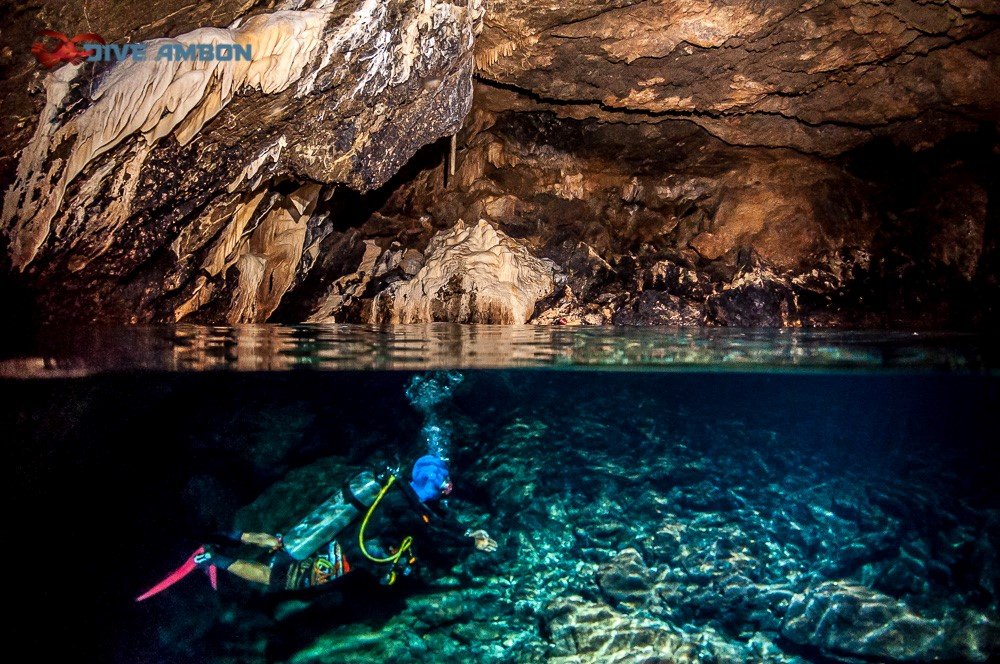 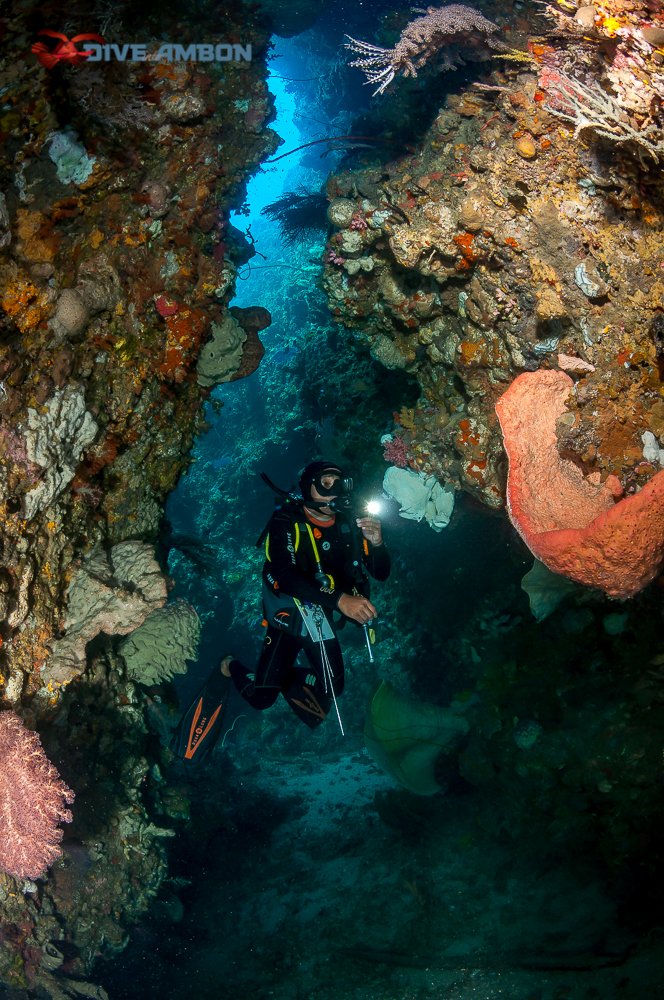 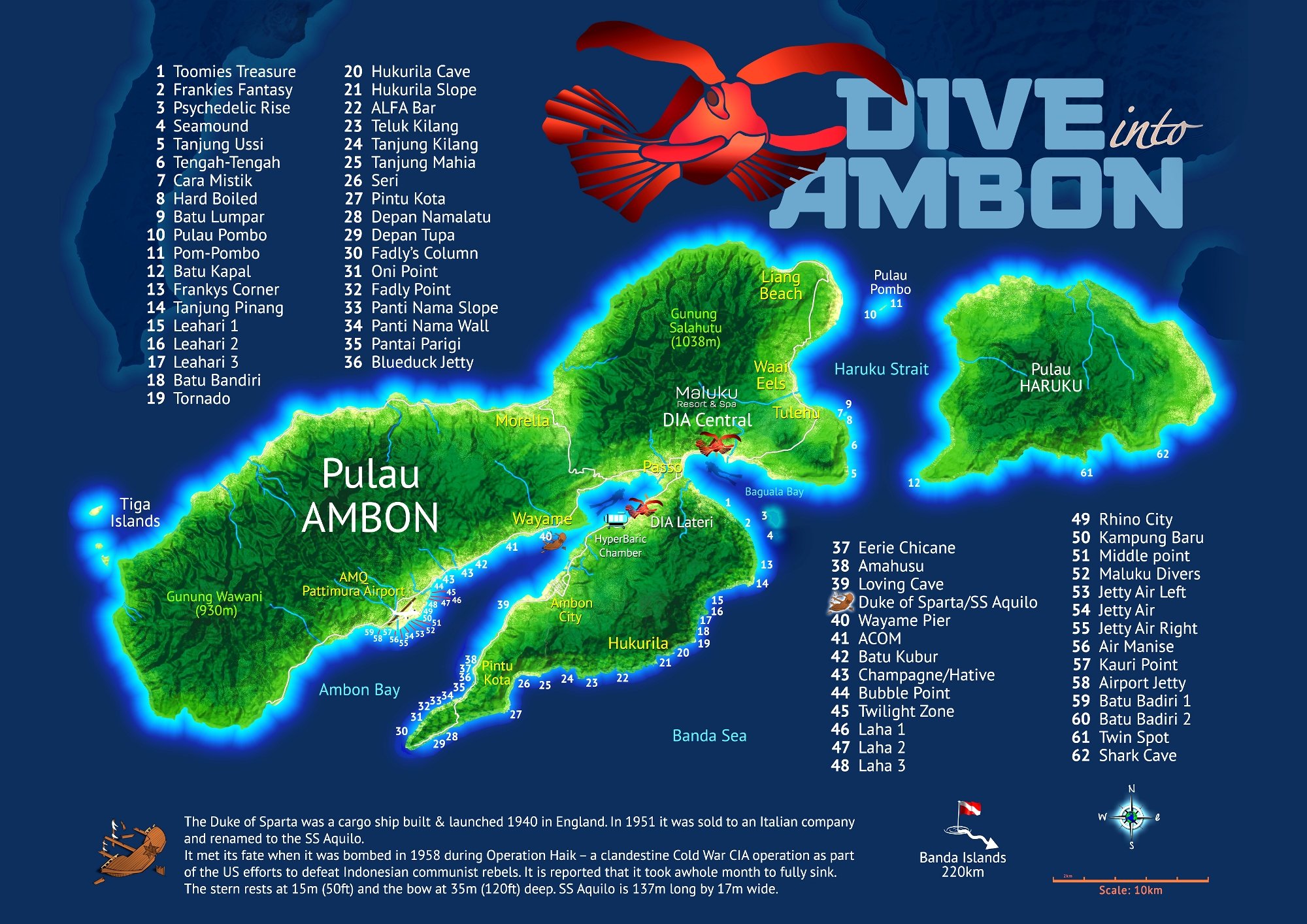 Upon arrival at the airport, your driver will be waiting for you at the exit with a name sign. He will take you to your hotel. Your room may not be ready yet at an early check-in. But you can already use the other facilities of the hotel of course.

The coming week you will be a guest at the Spice Island divers. In these seven days you will make a total of 20 dives and enjoy what the resort and the sea have to offer. The resort is located near the village of Laha, directly on the Bay of Ambon, about 10 minutes drive from the airport and 40 minutes from the center of Ambon city. The diving season runs from September 1 to June. From mid-October to mid-May, in addition to muck diving, diving is also done at the dive sites on the south and east coasts.

Dive Season: The best months for diving are September to December and March to April but also the months between. The Moluccan islands have the seasons reversed from the rest of Indonesia, when they have the dry season, its rainy season in Indonesia. Visibility: Usually is good (20-30m) except some muck sites close to the harbour or where sand is easily stirred up. Water Temperature: 20C/68F – 27C/80F Skill Levels: Dive sites are available from beginner through advanced. Dive Access: Land based diving, boat diving and shore diving. Many live-aboard start and end their itinerary in Ambon. Good option to add land based diving at the beginning or ending end of you live-aboard trip. At the agreed time, your driver will pick you up for your transfer to the airport or the port.
Offerte
Offerte

The Spice Island resort & spa is located on the Hitu peninsula of Ambon, about a 10-minute drive from the airport. The 10 Seafront Villas all have a view of the bay of Ambon, have AC cold and hot water showers and are spacious. The five Garden Rooms are housed in one building, also have air conditioning, hot showers and a view of the garden. The diveresort is 'build by divers, for divers. Everything you need as a diver is available. meer info more info Informations supplémentaires

Ambon, the capital of the South Moluccas island group, is located on the island of Ambon of the same name.
The pleasantly busy city of Ambon is ideal for a tour by becak (bicycle taxi). The colorful market, the Merdeka square with the World Peace monument and the statue of the freedom fighter Pattimura are nice sights.
A little further away is the statue of Martha Christina, Pattimura's female ally. If you have a car available, also drive to the village of Soya di atas and take a drink of water. It seems that it makes you a lot younger. The Siwalima museum is also worth a visit and is on the route to Pintu Kota, the iconic gate of Ambon.

Ambon town has great appeal to young people from the surrounding villages and islands, making the population very young. They mainly come to look for work. The main employer in Ambon City is the government and a civil servant job is highly sought after as it provides security, status and benefits (such as being able to help family members). But for Moluccans who have lived or were born in Ambon for a long time, the village of origin (of the family) remains very important for identity. At important village events or on public holidays, many Ambonese return to their families' village.


In terms of accommodations, you can choose from city hotels, such as the new Santika with swimming pool and the cozy family hotel Mutiara. If you want to be outside the city, the Maluku Spa Resort in Natsepa, more than half an hour's drive from the center, is the best choice.

Ambon city is by far the most important hub of the province and plays an important role for the whole of East Indonesia. Across the Bay of Ambon (Teluk Ambon) is Pattimura airport with scheduled flights to Makassar, Jakarta, Surabaya, Bali, Ternate and Papua. In addition, a number of Pelni passenger ships call at the city. 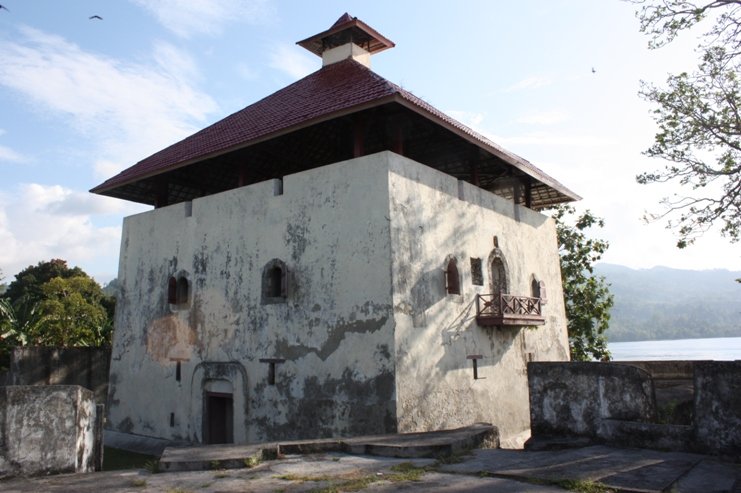 Ambon out of town

On the northern peninsula of Hitu is the reasonably preserved Fort Amsterdam. A short distance away you will also find the oldest mosque and church of Ambon.
In the east of the island lies the village of Waai with the famous sacred eels. Nearby are the hot springs of Tulehu and the lovely white beach of Liang.

Public transport on the island itself consists of the Angkotan Kota, small buses that serve many destinations on the island from the Mardika Terminal near the center of the city. 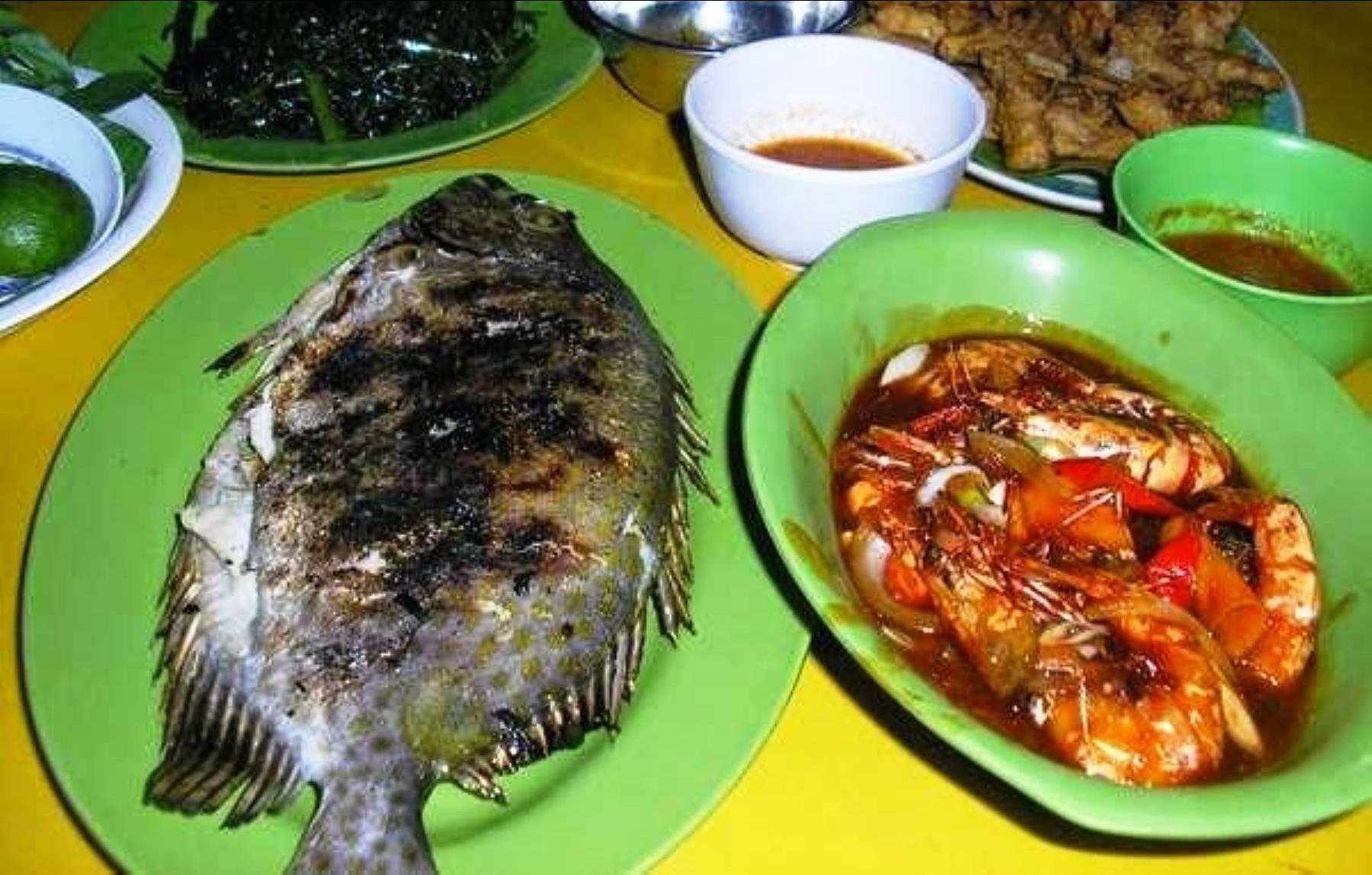 Ambon city has very nice fish restaurants. Me myself would recommend Rumah Makan Ratu Gurih, busy on the weekends, but during the week you can eat the tastiest ikan goreng or ikan bakar (deep fried or grilled fish).
Be sure to have a coffee at Rumah Kopi Sibu Sibu and get amazed over the nice pictures and interior.

Dive Season: The best months for diving are September to December and March to April but also the months between. The Moluccan islands have the seasons reversed from the rest of Indonesia, when they have the dry season, its rainy season in Indonesia.
Visibility: Usually is good (20-30m) except some muck sites close to the harbour or where sand is easily stirred up.
Water Temperature: 20C/68F – 27C/80F
Skill Levels: Dive sites are available from beginner through advanced.
Dive Access: Land based diving, boat diving and shore diving. Many live-aboard start and end their itinerary in Ambon. Good option to add land based diving at the beginning or ending end of you live-aboard trip. 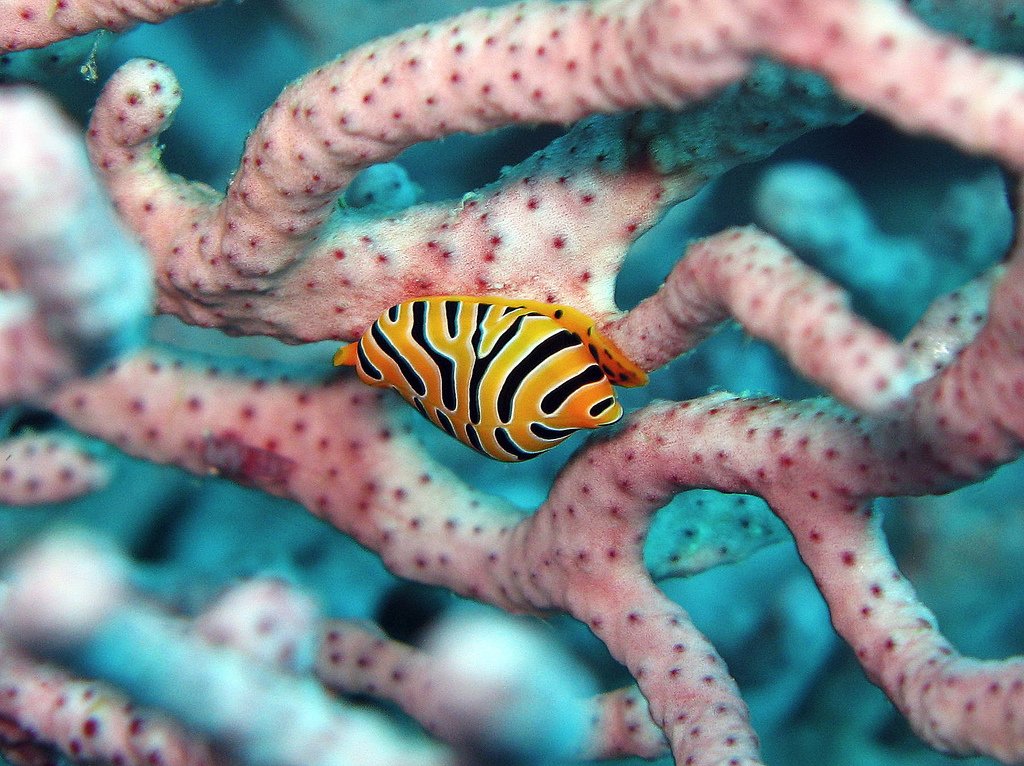 You dive on a slope covered with sand and rubble. Among the stones there are small sea fans where lots of Kauri snails are living. We found a total of four different species just on this dive site, among them the beautiful tiger Kauri (Crenavolva tigris) and some kauris that look like they are part of the coral (Prosimnia piriei and Phenacovolva rosea) and are usually rather difficult to find. On another sea fan dozens of small porcelain crabs and several species of spider crabs were crawling about. 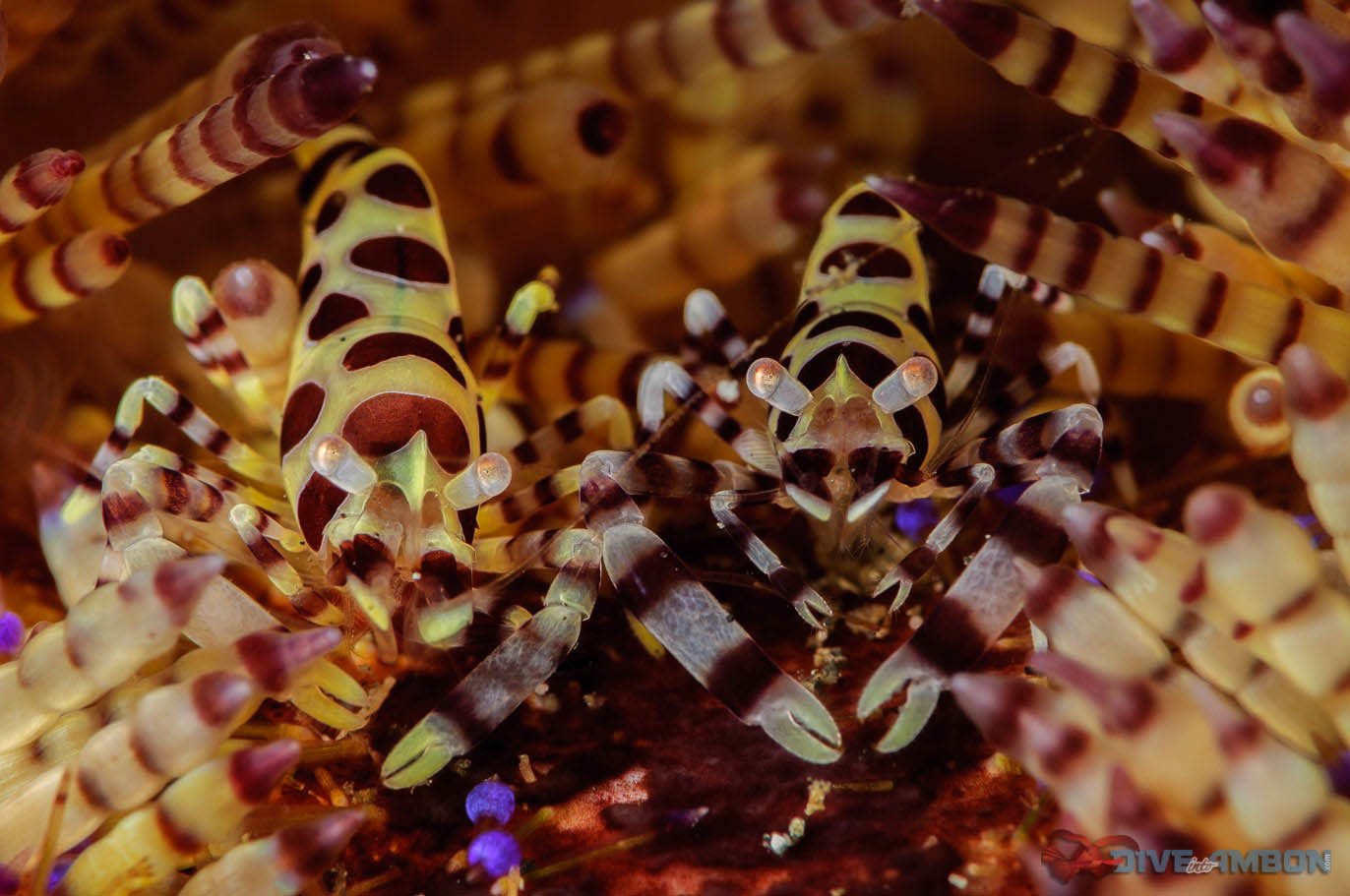 A rubble slope with a lot of waving soft corals on the top and special sponges that look like grayish leaves. There is a large coral block with leaffishes and lots of cardinalfishes on about 17m and we got stuck there because there were so many photo opportunities. Some of the cardinalfishes had eggs in their mouth and two pufferfishes were circling and fighting. Further down our guide found a pair of Halimeda Ghostpipefishes (Solenostomus halimeda) nearly invisible among the Halimeda plants and another single one the same color as the special sponges. Part of this dive site was covered with the colorful poisonous sea urchins (Asthenosoma ijimai), some with Coleman shrimps (Periclimenes colemani), some with Zebra crabs (Zebrida adamsi) or both. 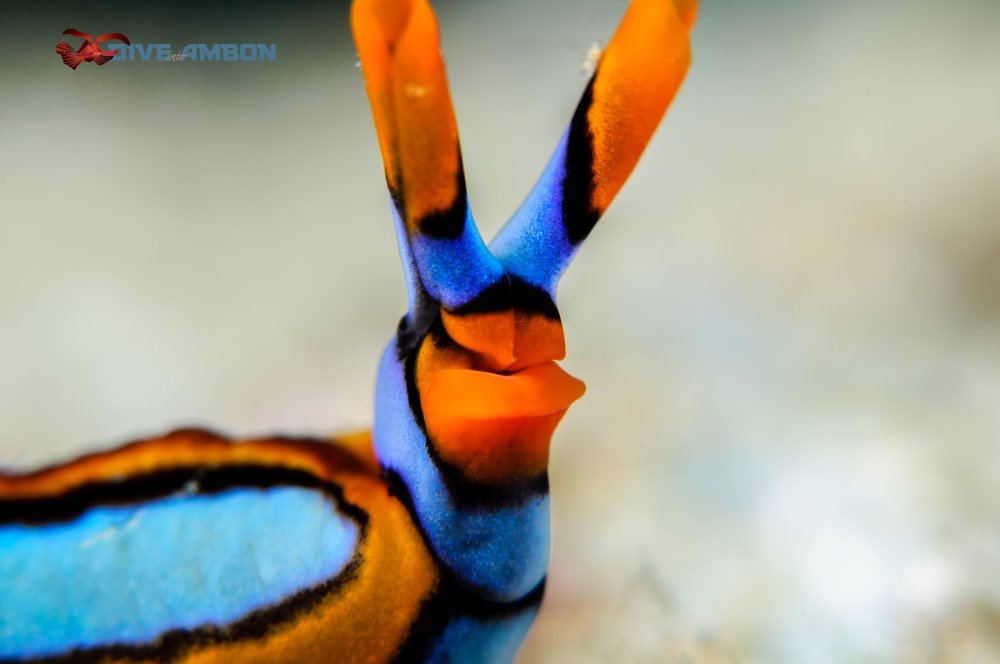 This dive site is underneath a long pier which lies just past the end of the airport runway. There are always large schools of small fishes and juvenile batfishes between the columns covered with sponges and on the sand you find small critters like nudibranchs, morey eels, lionfishes and sometimes Rhinopias scorpionfishes. 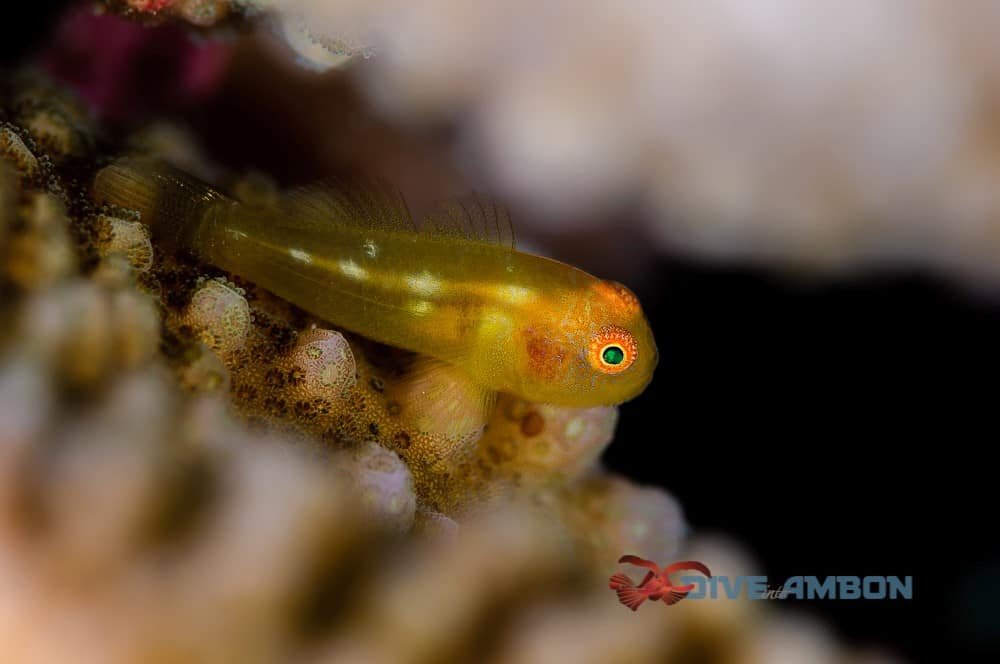 It is a working jetty, so there were boats overhead. Underwater there is some rubbish around, but also plenty of interesting critters. A special find were the shy yellowhead dwarfgobies (Trimma stobbsi) and a Lined Fire Worm (Pherecardia striata), about 20cm long. 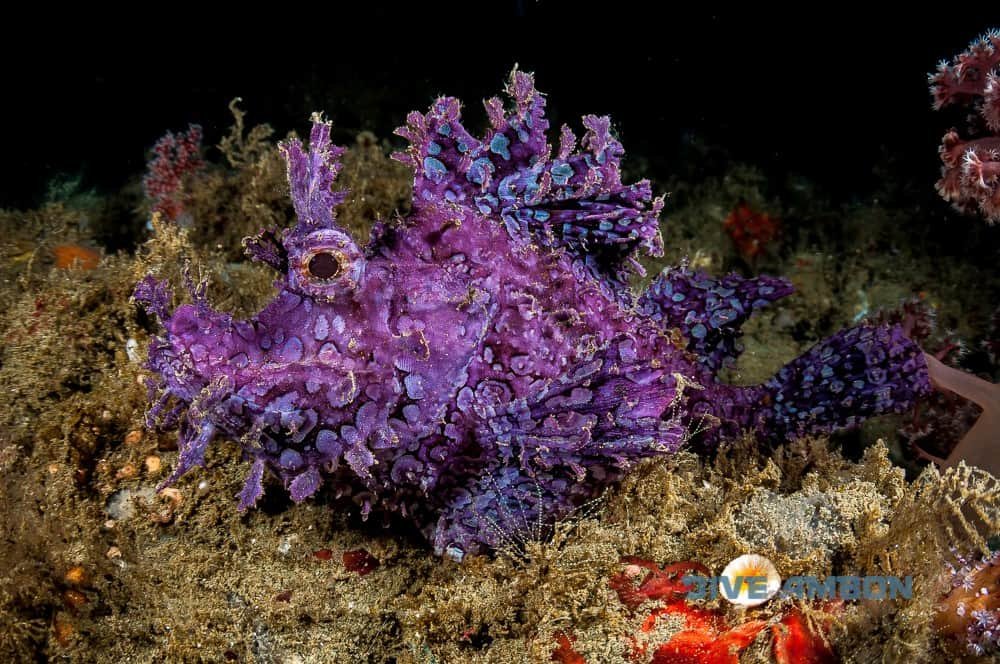 The whole area from Rhino City through the Twilight Zone to Laha 3 is a great place for diving. The dive sites are basically slopes with stones, patches of corals, sponges and soft corals. It seems to be one of the places you regularly find the exquisitely colored Rhinopias scorpionfishes. These beautiful animals come in yellow, blue, red, pink to peach and brown and are actually not very shy. There is a lot of confusion about the three Rhinopias species. In Indonesia you find only the weedy Scorpionfish (Rhinopias frondosa) and Eschmeyer’s Scorpionfish (Rhinopias eschmeyeri) 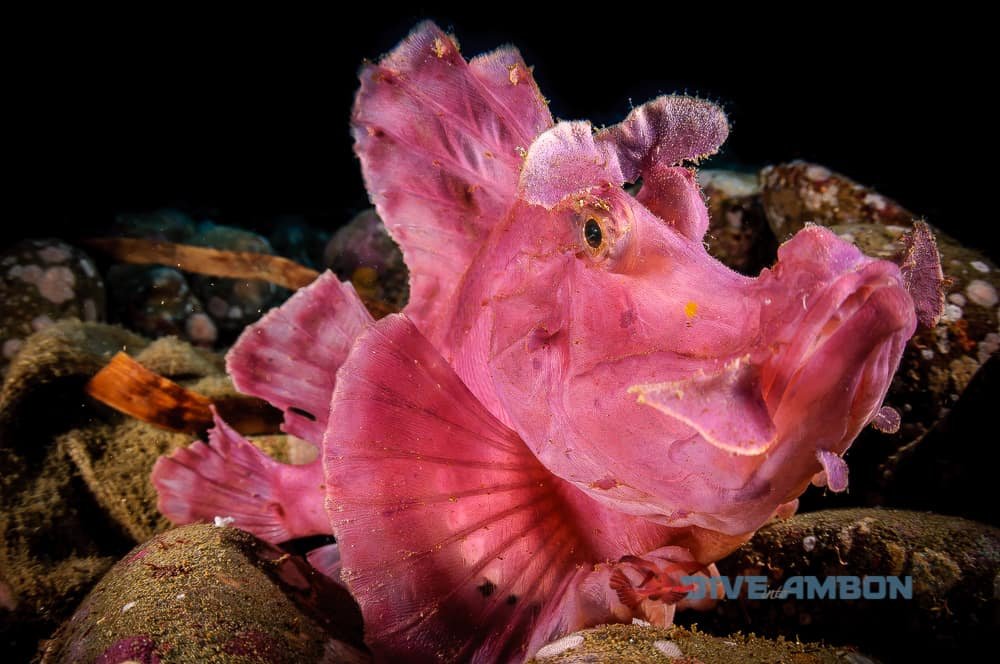 The area from Laha 1 to Laha 3 is also called the Twilight Zone. This are is also the area, where the psychedelic frogfish (Histiophryne psychedelica) was found. A slope covered with stones and small sponges, corals. Lots of frogfishes, nudibranchs and slugs and sometimes flamboyant cuttlefish, jawfishes, lots of gobies, small crabs and shrimps and ghostpipefishes to be found. 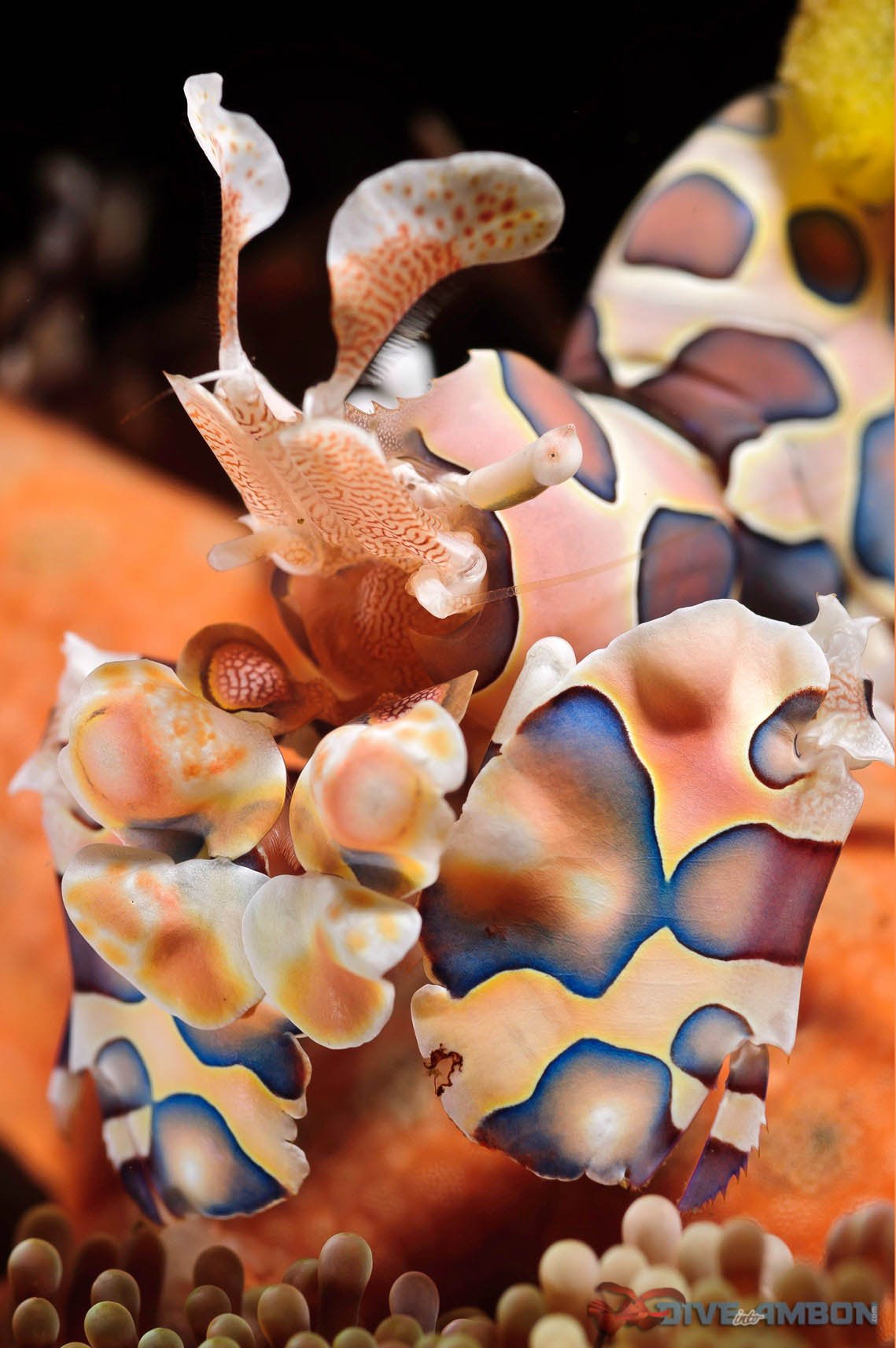 This dive starts about 100m south of the jetty. It is a steep slope covered with nice corals and large sponges and with some sand coming down in channels. After a while the slope turns in a wall with nice small crevices and large coral outcroppings. There are a lot of bryozoans and small hydroids growing on the wall and everywhere are blue and yellow tunicates. Between we found nudibranchs, a harlequin shrimp and a juvenile frogfish. At the end of our dive everything was covered with Black Triggerfishes (Melichthys niger) and mackerels darting among them.
≡