This tour module takes you to the wonderful waters of Kaimana. On Saturday we pick you up at your hotel or the airport in Kaimana and you sail in one hour and a half to the island Aiduma.
In and around Triton Bay are now more than 30 known dive sites. You can choose for 2 or 3 dives per day (in total 10 to 15 dives).
Once a week the Triton Bay Divers make a visit to the whale sharks, a short hour by boat away.
From the resort different excursions are possible to for example the Karst Islands, Sisir of Froma Jaya where around sunrise and sunset you can admire the birds of Paradise.

Triton Bay is open from September to June. Best time to go there is from November to May. 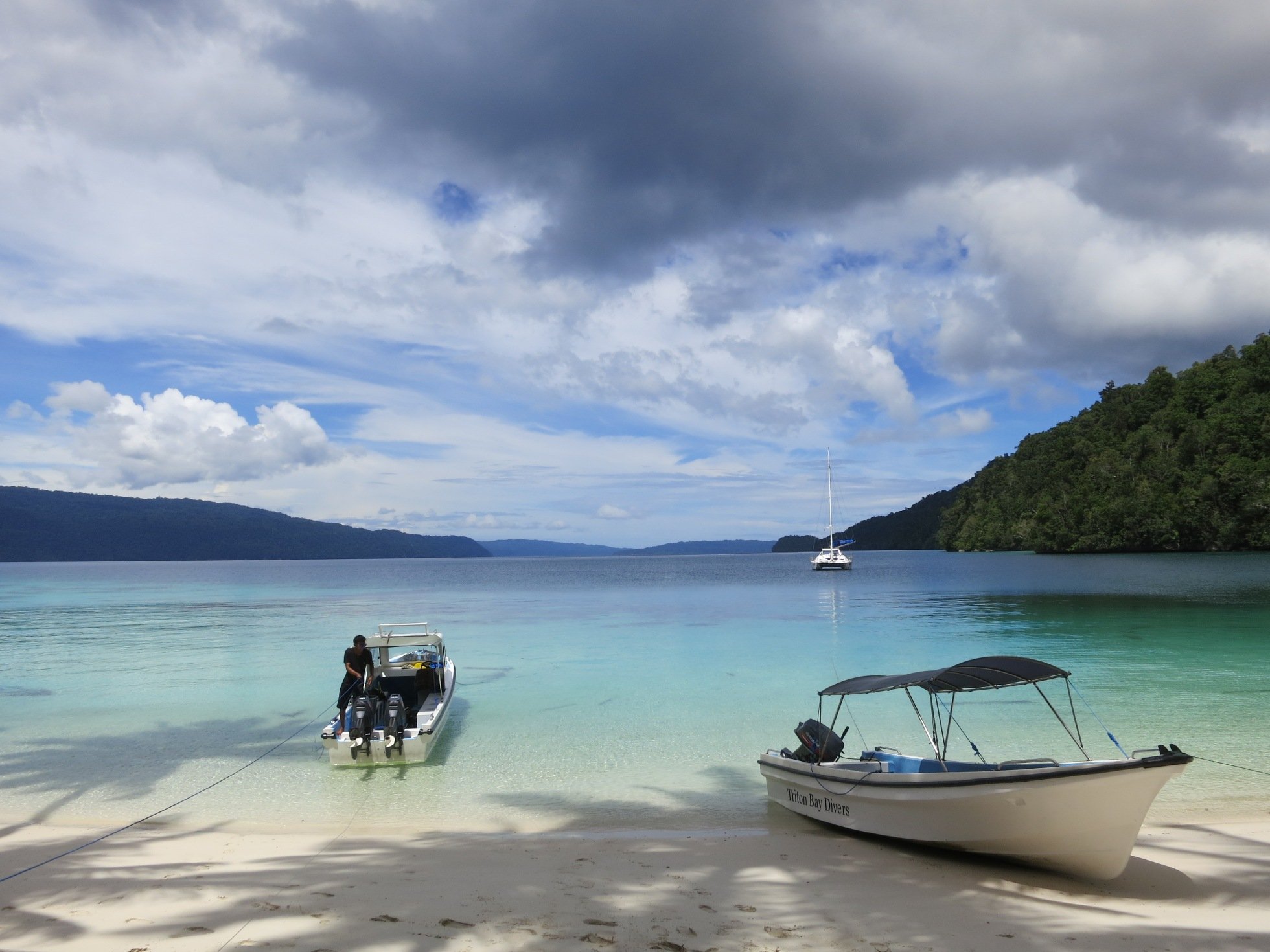 Flights to and from Kaimana

Do you want to combine Kaimana with Raja Ampat? Then it becomes a little more complicated. Garuda flies on Wednesday-Friday-Monday from Kaimana to Sorong and back.
Wings Air flights are easier in that case, because they fly back and forth on Saturdays and Sundays. Most resorts in Raja Ampat have a transfer on Sunday, so that we arrange an overnight stay for you in Kaimana or Sorong.

Surcharge 3 dives per day (15 dives in total): € 175
Surcharge Original Bungaloe: € 130
Included:
•Breakfast, lunch and dinner
•Water, coffee and tea
•2 dives per day (in total 10 dives if opted for dive package)
•Transfer from Kaimana to resort and vice versa (only on Saturday) 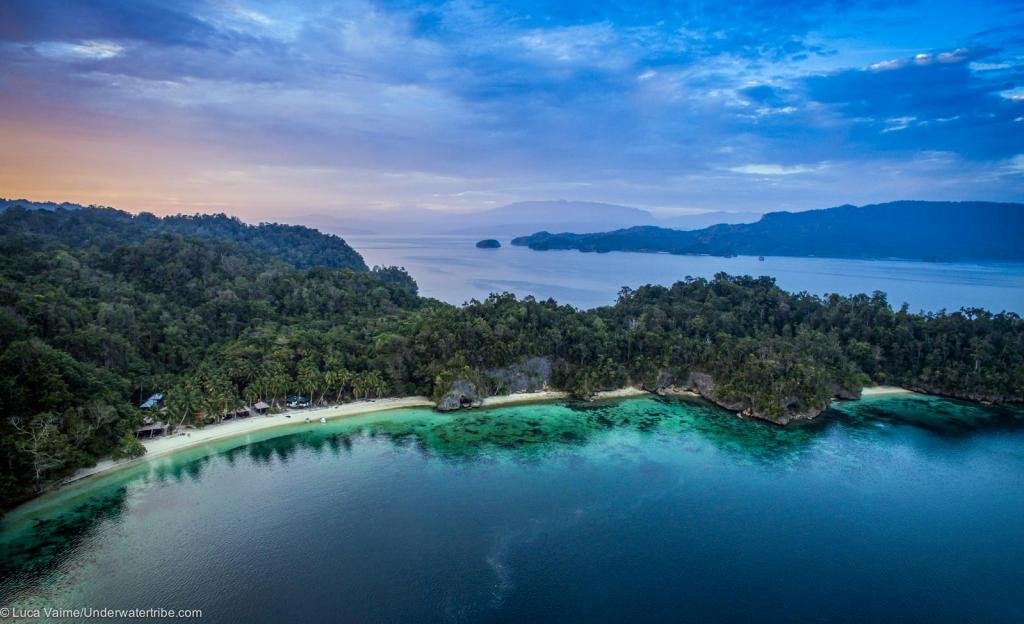 When you arrive at Kaimana airport a driver from Triton Bay divers will pick you up and take you to the harbour. You might have to wait a little for the other guests arriving on a later flight. The boattrip from Kaimana to the resort takes about 2 hours. Don’t expect to do more than 1 dive on the day of your arrival. 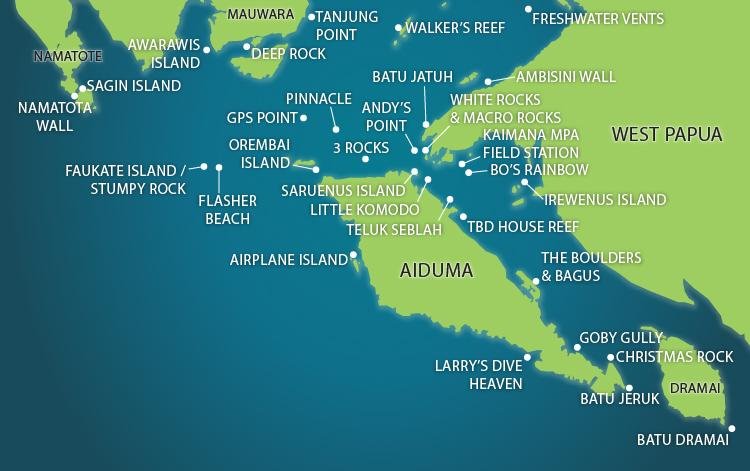 Triton Bay has some 30 known dive sites and probably as many not yet discovered spots. Because Triton Bay is still relatively unknown there is still a lot to explore. Of course we go diving 1 day among the whale sharks. Other dive spots are indicated at tab Place & City. 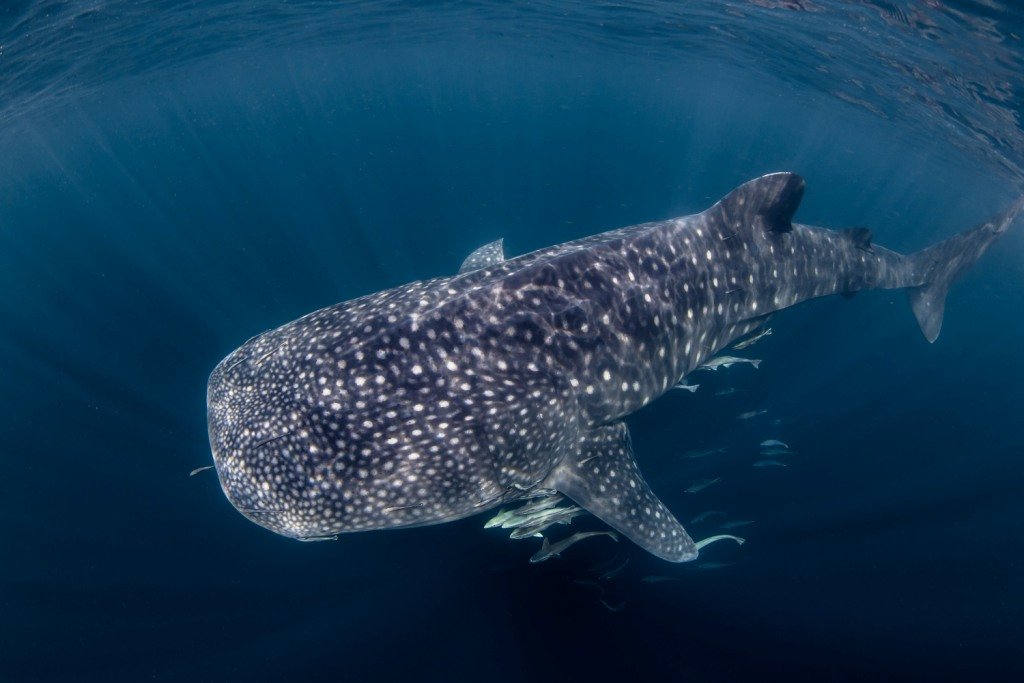 Day 8 Back to Kaimana 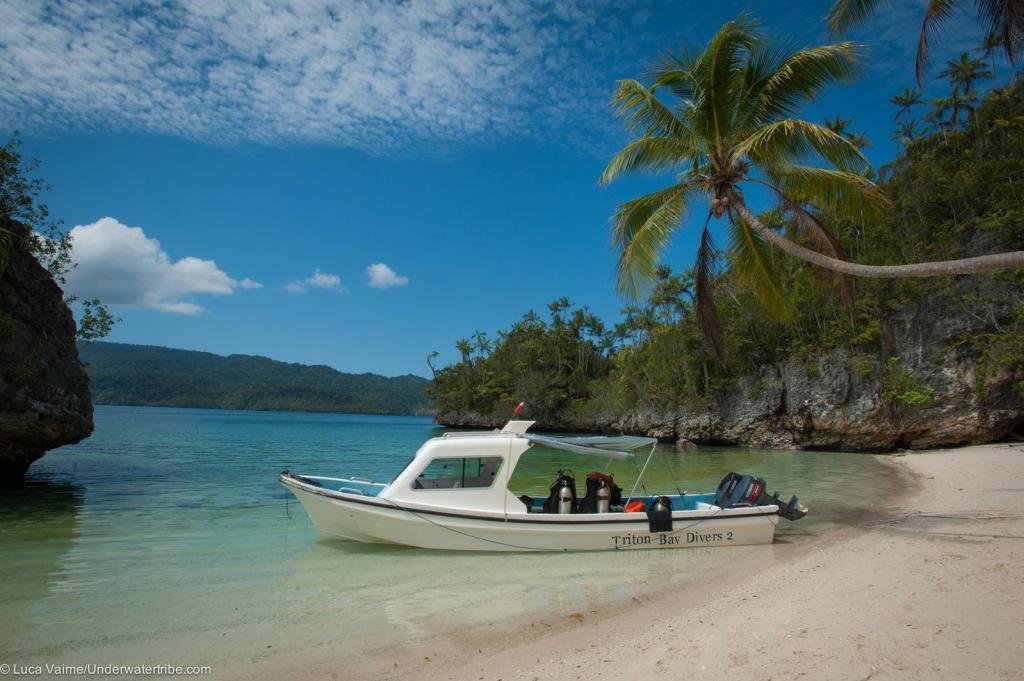 After breakfast we sail back to Kaimana in about 2 hours. Then we’ll drive you to the airport for your next destination.
Offerte
Offerte

Triton Bay divers are located on the island of Aiduma, about 2 hours by boat from Kaimana. The small dive resort has only 6 detached bungalows. The rooms are spacious and have a fan, shower and terrace overlooking the bay. We propose Triton Bay divers exclusively as <A HREF="https://www.merapi.nl/reis_optie/bouwsteen-7-dagen-duiken-triton-bay"> 7-daags arrangement.</A> meer info more info Informations supplémentaires

Triton Bay is approximately a 2-hour boat ride from Kaimana. The Triton bay has an underwater world that is comparable to that of Raja Ampat. Without mantas, yes, but with the whale sharks.

The Trton Bay divers resort is located on the island of Aiduma. More than 30 dive sites are now known in and around Triton Bay. Once a week the Triton Bay various visits to the whale sharks, within an hour by boat.
Various excursions can be made from the resort to, for example, the Karst islands, Sisir or Froma Jaya, where birds of paradise can be admired around sunrise and sunset.
Triton Bay is open from September to June. The best time for Kaimana and Triton Bay is from November to May. 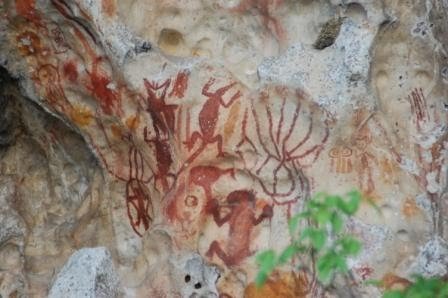 Kaimana is a pleasant little town with an atmosphere of bygone Dutch times. In 1962 the last Dutch soldiers left Kaimana, after the Netherlands had handed over New Guinea to the United Nations.

In the area you will find ancient petroglyphs in beautiful nature. These are best admired in Bicari Bay, half an hour by boat from Kaimana.
Nature around Sebakar bay is also unsurpassed. You will find colorful butterflies, orchids, coral reefs and birds of paradise.

Divers will of course go to the Triton Bay divers resort. The resort is located on Aiduma Island, about 2 hours by boat from Kaimana. The Triton bay has an underwater world that is comparable to that of Raja Ampat. Without mantas, yes, but with the whale sharks. More than 30 dive sites are now known in and around Triton Bay. You can choose 2 or 3 dives per day (total 10 or 15 dives).
Once a week the Triton Bay various visits to the whale sharks, within an hour by boat.
Various excursions can be made from the resort to, for example, the Karst islands, Sisir or Froma Jaya, where birds of paradise can be admired around sunrise and sunset.

Tourism is still in its infancy in Kaimana, but for those who do not expect luxury, Kaimana offers plenty of pleasant surprises. The best time for Kaimana and Triton Bay is from November to May.

Kaimana is not the easiest place to get to. Airlines regularly change their flight schedules. In 2020 there will be daily connections with Sorong and several times a week to Manokwari.

Triton Bay is becoming best known for its beautiful soft coral gardens and it has had guests suggest that this should be called the “soft coral capital of the world” with all due respect to Fiji. And of course, the whalesharks attract many divers!

Most of the dive sites are in and around the Iris Strait (the body of water between Aiduma Island and the mainland) just south east of Triton Bay. For the majority of the dives it is not necessary to venture deeper than 20m as the shallower parts boast the best coral and fish action. Unfortunately the price to pay for the speculator soft corals gardens and masses of schooling fish of every shape, color and size, is reduced visibility which varies considerably, but averages around 10 ~ 15 meters. Please note visibility can be as low as 5m or over 25m as it is dependending on weather and currents/upwelling.

Water temperatures vary between 28-30 degrees Celsius during the diving season and drop down to around 24 degrees during the eastern monsoon (June ~ Sept).

This dive site is always full of surprises! Every time you dive here you will see something new, yellowfin barracudas, a squadron of humphead parrotfish, large schools of hunted anchovies, devil rays that skim by, wobbegong sharks and also solar powered slugs and dwarf seahorses. Visibility is not always clear at this dive site, but you will be richly rewarded. The currents can be quite strong, so stay close to your dive guide.

Another dive site that often surprises us, this one has both soft and hard coral gardens which every photographer dreams of! It also hosts a large school of bat fish as well as hunting jacks, midnight snapper, bumphead parrot fish and napoleon wrasse. We have had surprise visits from Devil rays, Eagle rays as well as the odd Manta ray here so remember to look into the blue while you are diving!

Another dive site very close to our resort is Bo’s Rainbow , which has huge soft coral covered boulders with schools of fish. A relatively shallow dive, bottoming out into a gentle sandy slope at 16 meters it is perfect for both wide angle (especially when the sun is shining) or macro. There is also a shallow swim through cutting through the middle of the island. If there is strong current, divers can stay within the protected side of the island. With no current you can easily swim around the entire island.

Flasher Beach is located on a little island that sits by itself in the middle of the ocean outside of Triton Bay and north-west of Aiduma. It was named because of the beautiful Flasher Wrasse that are seen here. Flasher wrasse are the most colourful of all reef fish and are so named because of the mating displays by males during the late afternoon. This dive site is about 30 minutes rider from our resort, so we are happy to say we have found another beach where we have also found the flasher wrasse and it is just around the corner from us. We also have pygmy seahorse among other macro subjects on this dive site!

Locally nicknamed “Pintu Arus”/”Palau Arus” (current island), this small island is just a 5 minutes boat ride from our resort and offers 4 completely different diving experiences that will blow your mind! The most talked about dive is Little Komodo where the huge boulders nearly break the surface with soft corals and schools of anthias, damsel fish, fusilier. Deeper down schools of sweetlips and snapper hang out in the black coral bushes, hunting jacks as well as wobbegong can also be found here. If you are in the mood for some macro photography this site also offers a chance to check out the baribanti pygmy seahorse as well as nudis and shrimp. If the currents are playing nicely you can gently drift along a beautiful soft coral covered wall and end your dive in Aquarium.

Aquarium is best dives when the waters are nice, calm and glassy on top to make the most of your reflection shots. It’s a small dive site but boasts beautiful soft coral bommies and loads of schooling fish.

If you are looking for a little more action, then (conditions permitting) you can enjoy a drift dive along the western side of Saruenus island! But beware, currents can get crazy with eddies and timing on this dive site is everything! The soft coral gardens cover the wedding cake tiered reef like a carpet and is totally mind blowing! You can often be joined on the dive by giant grouper checking you out as well as schools of fusilier and anthias playing in the current! Note to yourself: if the fish can’t swim against the current you definitely can’t! But it’s fun to watch. Reef hooks might be a good option on this dive.

Can be dived day or night and should be named Candy Crab City!!! Covered with soft coral bushes it is a gentle sloping reef bottoming out at around 14 meters. This is mainly a macro site but we have also spotted wobbegong sharks, frogfish, and the very very elusive and shy epaulet/walking shark on this dive site.

We are really excited to discover some great macro life on both of our house reef sites. Flasher Wrasse, Saron/Marble Shrimp, Harlequin shrimp as well as the LSD/Picturesque dragonet and mandarin fish! We have also spotted bob tail squid and starry octopus on our night dives!!
≡